What do the people want? Fun, and sun, and sea, and food, and drink? Yes, all that! Some intimacy? Oh, maybe. Culture, too! Yes, that, too!

But, what is culture in the Caribbean context? We have precious little of historical interest, compared to the great civilizations of the world, like China, or India, or the Aztecs and Mayans of the Americas. Some of our territories have history that can be traced to before the arrival (by accident) of a Spanish sailor and the subsequent arrival of many other Europeans. Some territories mark their existence as being from 1492, and naturally annoy anyone who understands that the lands were there long before Senor Columbus. But, people latch on to all sorts of things when they are floating adrift. But, history there is. Now, I am not going to reconfigure the whole of Caribbean tourism, but am just reflecting on a few days on one of the exotic islands that we have in our hands–The Exuma archipelago.

History is iguanas, rare, and related to dinosaurs.

History is pigs that swim. Do your pigs do that, or just crackle on a spit? 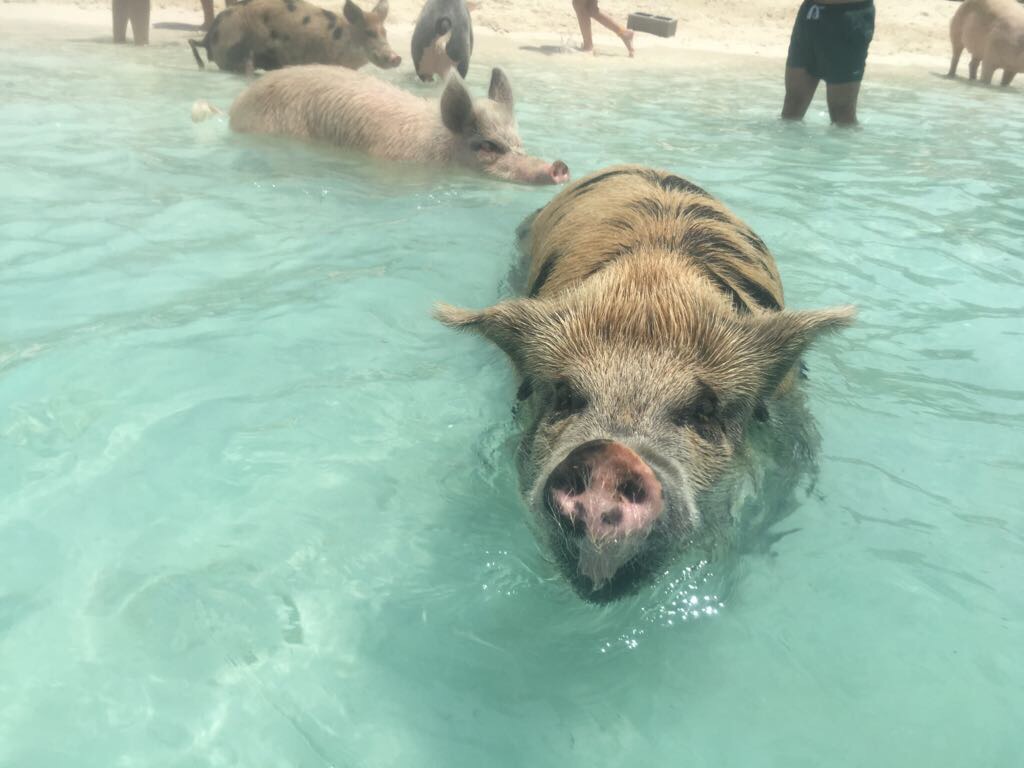 History is making the future that did not come naturally from the past, as in importing 1000 coconut palms to adorn a piece of coral that a man wants to develop as an exclusive resort. Are the environmentalists happy with this dramatic change in the eco-system? What can coconut palms create that wasn't' there before, including plant-borne diseases? How odd that these plants that love sandy solid and saltiness were never part of the landscape from much earlier. Island folk know a lot about their environments. What did they know about coconuts?

Now, I clearly do not look like a tourist, in the eyes of the regular Exuman: my family and I are 'natives', meaning we are of the darker tones and our hair is kinky. (Our transport provider was taken aback to see 'natives' waiting on him, though. Fortunately, while he was wriggling out of that little faux pas, we discovered that he was not in fact collecting the right people–we were 5 and he was looking for a party of 10. Now, you think he'd have figured out the mistake a bit more quickly, but, island time is island time, man. So, he turned back and took us to where he had collected us, and went in search of his 'party of 10'.)

Mistakenly, I thought a tourist was ANY visitor, but clearly, there are visitors and visitors. In passing, my money is as good as any many coming from North America or Europe. Now, don't get me wrong: I'm not offended at being called 'a native', so long as the service rendered to me is no less than if I were a 'real' tourist. So, far, that has been the case.

Once we were all on a bus together, heading off to a boat to take us on a 125 mile/8 hour trip around the cays, we were all the same. Sharks bite anyone; wild pigs take bread from, and will kiss, anyone; iguanas take lettuce from anyone–animals tend to be equal opportunity creatures. That some spoke Italian and wrapped themselves in G-strings and 'native' shawls, should not make them different from those who spoke Patois and had crumbs from grouper fingers on their lips. 'We would all sink or swim, together', if our 'Captain Smiley' made any mistakes.

'Look, how blue is the water!' Water isn't blue; it's usually clear. But, depending on the clarity and the depth of the water, the white light has its red, yellow and orange absorbed better by water, leaving blue hues more dominant.

The 'real' tourists I met wanted 'authentic' island experiences. For them, that was food other than hamburgers, fried chicken and fries or another form of fast food they could find in their metropolitan homes. Grouper fingers, fried lobster, peas and rice, cooked by the lady owner: that hit the spot. Coconut tarts, baked by the mother in the home next door. Conch fritters, made by the sister. Does it tastes good? Of course! Everyone was carrying a coconut tart and we knew where they'd bought it. They were so good that the 50 mile round trip to get some extra supplies of tarts and banana bread to take back to the metropolis was more than worth it.

Real tourists like their leisure activities, so our 125 mile trip on the sea to tour the keys was 8 hours of total engagement. Well, the engagement was more bracing against the wind, as we sped over the waves, or putting on snorkels and flippers, or avoiding being dunked by 300 pound hog. I went off to play golf at what is reported to be the longest course in the Caribbean. I loved the front 9, which was friendly, with water everywhere, in the form of little lakes. The back 9 was on a narrow strip of land beside a luxury development, that had the full force of the ocean wind to keep you honest. I hit balls that went 50 yards further than I thought, with the wind, and shots that went half as far into the breeze. Win some, lose some. I was feted, with a cooler filled with light beer: that was a first on a golf course, for me. I and the other madmen out there in the afternoon twilight after 3pm had the best of the day.

But, I got the better of the conditions, compared to the pro golfers who had to tackle the course back in January:

After my round, I spoke with one of the golf course workers–a Jamaican. He explained how Butch Stewart wanted to do things the people want, especially with food: French food = French chefs; Sushi = Japanese chefs, etc. But, guests are encouraged to do something off the site every day, so that their spending can benefit a wider community.

That's the essence of the tourism business, if you want to be successful. If they ask for cake, and you only have bread, bring them cake. But, also give them a chance to touch as many people as possible in a short space of time.