It’s impossible to capture the full texture of any place by writing about it; it has to be lived. But, short of living it, it can be witnessed. So, instead of always writing about things going on in Jamaica, I often try to capture the essence of the country through what my eyes see. I’ve a huge portfolio of random pictures that I have taken as I move around the island, many of which I have shared, but recently I have decided to group them into themes. A current theme, is #JamaicaNoRiskTooGreat.

I’ve long noticed that Jamaicans perceive the riskiness of their lives in ways that often defy a certain logic, but those perceptions often revolve around the notion that what the individual does bears little significant danger to him- or herself. For that reason, and others (including sheer expediency), Jamaicans will literally put their lives on the line and believe that nothing will go wrong. While, in many countries, many agents and agencies would be doing their utmost to stop many of these behaviours, in Jamaica, it’s just ‘normal’ life. 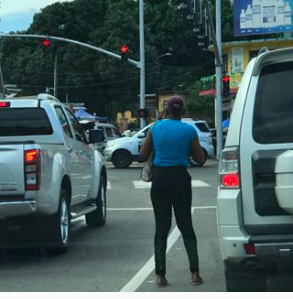 If you want to take a look at this and other themes, you can follow me on Instagram (@dennisgjones) to check my current theme(s). Enjoy!

Once again, some (maybe, many) Jamaicans are expressing concern about nominal depreciations in the exchange rate, and (dare I say) once again eyes are looking in the wrong direction.

First, let’s dispense with knee-jerk calls for the government to ‘do something’ about the level of the exchange rate. Whatever the government (and central bank)–‘the authorities’–can do is unlikely to have any lasting effect if the rate is being determined in a market. Sorry, the authorities can spend a good amount of hard-earned foreign exchange reserves trying to defend a rate, but we know how that can go (ask the UK about the pound in 1967, for instance).

I’ve seen a clear story about the exchange rate and it’s the counterpart to the story I’ve tried to tell about labour productivity (see, for example, Productivity problems in Jamaica—Jamaica Observer article.) Available data show that the average Jamaican worker is producing or serving less than in the past, ie productivity is declining. I did not clap when data showed employment was rising and unemployment falling. (The most recent data showed the trends of a rapid decrease in unemployment, while GDP flounders under an annual rate of 2 percent.) 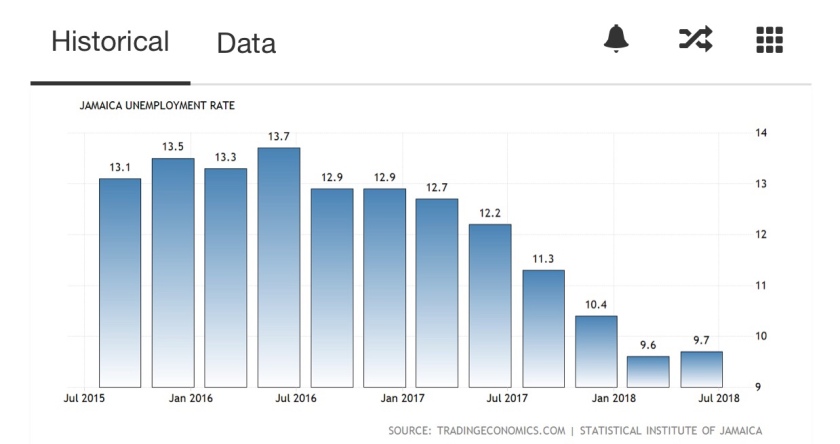 Why? Because growth (GDP) was hardly rising, and, arithmetically, output per worker must be falling.

In conventional economics, labour productivity movements are directly related to the movement of the ‘real’ exchange rate (ie. the nominal rate adjusted for inflation). (See IMF Working Paper, Does Productivity Growth Lead to Appreciation of the Real Exchange Rate?) So, as I noted a couple of years ago (see What’s the exchange rate telling Jamaica?) and repeated a few weeks ago, the exchange rate is telling a very clear–albeit, complicated) set of stories. Whatever else may be weighing down the exchange rate, it’s clear that Jamaica is not competitive enough to support the exchange rate, so it must depreciate. Jamaicans are busily looking at other people for undermining their currency’s purchasing power, without understanding what role they play.

I really ought to be doing something else on the 56th anniversary of Jamaica’s independence, but having gone out just after dawn to play a little golf and now trying to wrestle with crime-solving puzzles while watching series related to Inspector Morse, I thought I’d share some thinking I did over the weekend. They’re contained in the Twitter threads below (click on the boxes and the full threads should appear), and I hope are totally clear. If not, sorry. It’s mainly arithmetic and a bit of logic at work. That said, an annoying unknown about prices like the exchange rate is that we have some good guides about what it should be, but there’s no guarantee that in a market that has relatively free movement of demand and supply we can understand why the price is where it is. At the end of the day, financial analysts will tell you that the rate is that which has cleared the market, and it tend to stay at a certain level while participants are happy with that. That said, politicians hate being associated with negative news so always start to freak out when the country’s exchange rate is going in ‘the wrong direction’. So, I am really interested in whether the current Finance Minister, Dr. Nigel Clarke can keep his somewhat cerebral posture about the exchange rate, notably that the exchange rate is a shock absorber that allows other real variables (like output and employment) to remain less affected.

If you understand none of this, be blessed, and carry on your life regardless, saving me a piece of cake to go with the lovely cup of tea that you continue to enjoy 🙂

A Jamaican businessman friend of mine asked me the other day 'How can the Jamaican dollar stabilize long term against US dollar unless our long term inflation rate falls in line with long term US inflation rate which has averaged about 1.6% over the past 10 years?'.

Another twist to the J$ story is what the exchange rate may be telling us about the persistent misalignment in the economy. Some Cabinet ministers want us to ignore official data and accept that Jamaica is growing faster. If that were true, how would the J$ be expected to behave?