As I drove home yesterday afternoon (at about 4.30pm) with my teenage daughter, we chatted about the squash ‘lesson’ she’d just had with me. That I wrote ‘lesson’ is to make absolutely clear that I am not really her coach, but am always happy to impart knowledge to her.

We approached the junction of Lady Musgrave Road and Hope Road, and saw that cars on Hope Road travelling west had entered the yellow box and blocked passage north from Lady Musgrave Road. Fittingly, I had been telling my daughter how to become excellent one must first develop consistent good skills; from that one can build superior ability. I pointed out to her that this was a lesson for many things in life, including what we were now experiencing: drivers have not honed the consistency of good behaviour on the roads.

No police officers were at the junction, where they had been positioned, with much fanfare several weeks ago. I knew that the day before, when most schools had reopened, police were out in force at many key points to ensure smooth transit for the heavier volumes of rush-hour traffic. I had seen them further north, by Barbican Square, as seen in this picture. 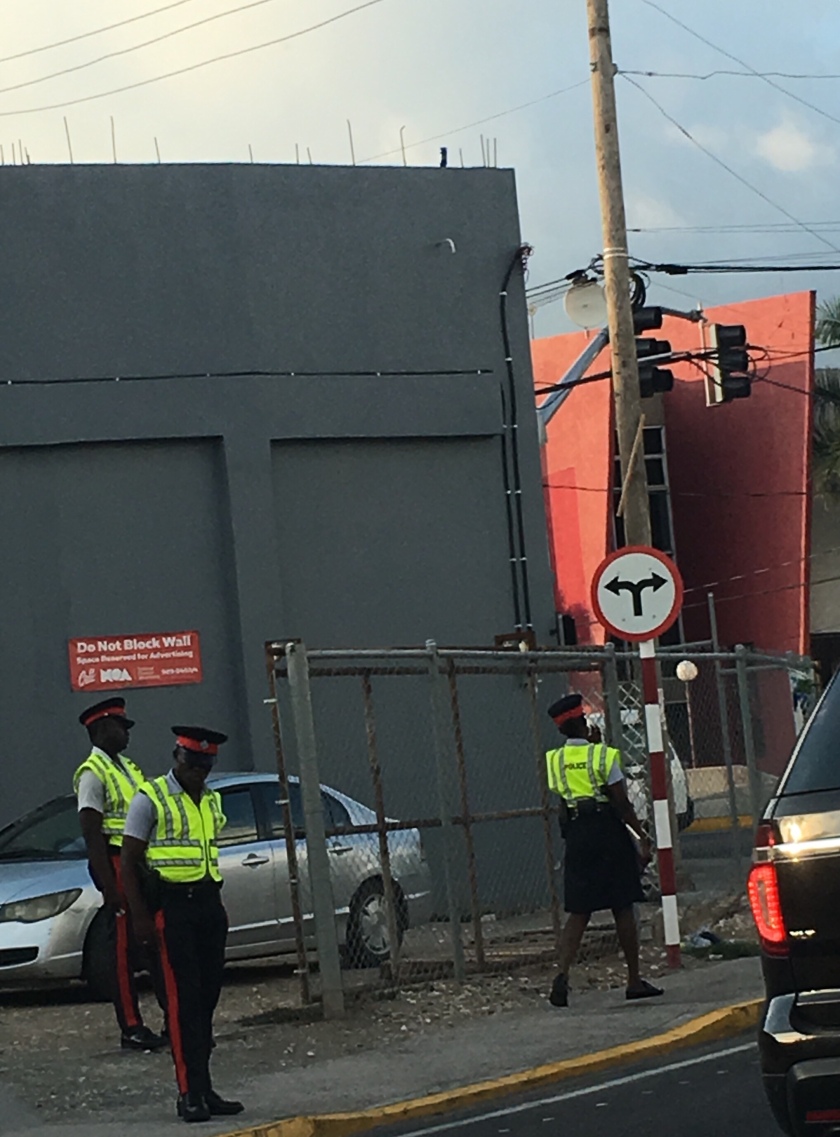 They were part of the new 700-member Public Safety and Traffic Enforcement Branch, formed from the merger of the police’s traffic and highway patrol and motorised patrol divisions, some of whom we’d seen on our homeward trip last week (seen on their new bikes in the next picture on Knutsford Boulevard). Whether on foot or on motorbikes, they were highly visible, even if they were not actually doing any active policing at the time. 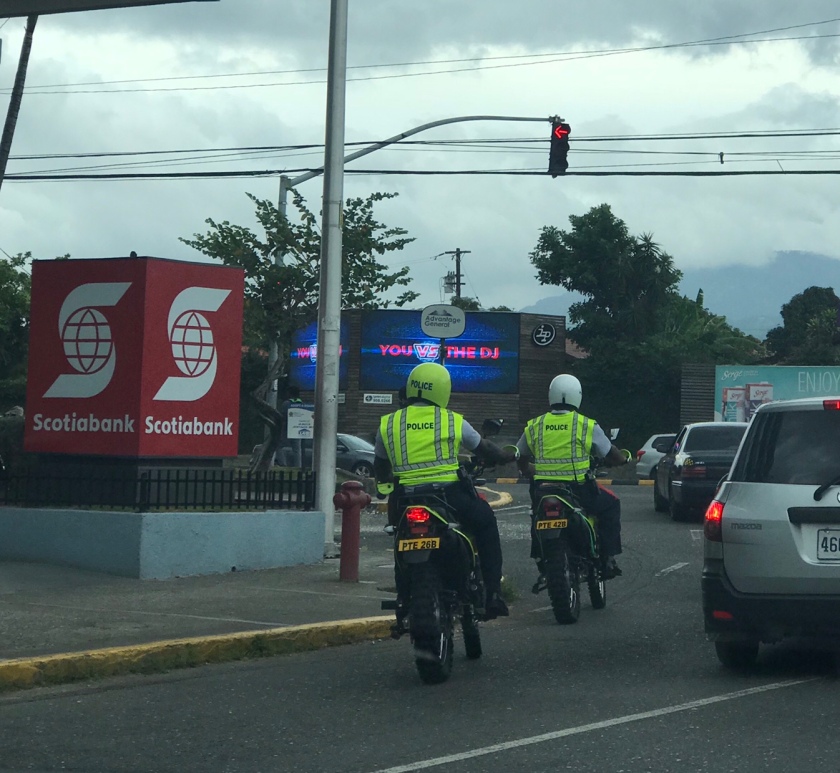 The point I made to my daughter was that when the police were previously at the Hope Road/Lady Musgrave Road junction, driver behavior was almost exemplary. However, such admirable conduct was in response to the raised probability of being sanctioned for misdeeds. The ‘experiment’ was too short to conclude that, in the absence of police at the junction, drivers would respect the need to not block the junction. So, I wondered why, with more traffic expected, the officers had been removed.

Interestingly, today’s Gleaner Editorial, Kudos To The Police, But … gave me much of the answer–we don’t have enough police officers: ‘While this formation will likely improve the police’s ability to maintain order in public spaces, General Anderson still has a sustainability issue. He just doesn’t have sufficient staff to efficiently do all the things required of the constabulary. Of an establishment of just over 14,000, the constabulary is short by more than 2,000 members.’

Whatever the show of apparent success in traffic management this week, we will struggle to see this maintained because the principal source of success–officers visibly patrolling roads–cannot be maintained. In other words, the JCF does not have the means to offer consistent service. This is not just a matter of controlling public spaces but must also affect its ability to maintain law and order, more broadly–aka ‘crime-fighting’. It’s the fundamental problem highlighted by the seeming success of the states of emergency in various parts of island: where police are heavily and disproportionately deployed, public behaviour is much improved. But, that has opened the floodgates for continued and rampant misbehaving elsewhere.

It’s an indictment of our governments and governance that we tolerate inconsistent service from any public agency.

Jamaican society has not yet reached a point where the wish of most citizens to conduct their daily lives in an atmosphere or order prevails over the desire of others to create mayhem. In that regard, we are immature–like little children who constantly have to be steered to do the right things.

That immaturity has cost us dearly over the decades and has little chance of changing while we don’t or wont put resources into changing behaviour for a long and sustained period.

Many see this as the fault of politicians, who tend to shun consistency in favour of ‘quick fixes’ that may have good PR buzz but, like most of our road repairs, dont stand up to the test of time or adverse conditions.

But, it’s not all about politics, but must be about whether we have really understood what can be described as ‘sticking to it’. That’s another way of looking at the consistency I was explaining to my daughter. We have been consistent…in our willingness to flout. As the Gleaner Editorial notes (though focusing on traffic issues), much of our lives is riddled by ‘untidy topsy-turvy…exaggerated by the seeming free-for-all…in open defiance of law enforcement’. That’s really a description of anarchy.

To my mind, the truth is that, by our individual and collective actions (and inactions), we constantly reinforce the notion that we embrace anarchy. Why else would people blithely accept a bus shelter being recently turned into a vending stand (at the junction of Barbican Road/Salisbury Avenue)? Whatever energy we expend complaining about how things won’t change for the better has to be set in the context of an unwillingness to consistently insist on orderliness. Whomever else we may wish to blame for that, we are all part of the problem.