For some time, my whimsical side has been dominating when thinking of ways to get out of the mire that is much of Jamaican daily life. In short, the economic and social Utopia that could and should have been ours, if we had had governments that did not ‘run with it’ but focused on building a vibrant and equitable society, could still be ours but by seeing something completely different for ourselves. Hold your breath. Jamaica is one big reality TV show, and if we embrace that, we could be shooting for the stars in no time. Now, I admit, it’s a wild idea that is going through my head but bear with me. Almost every day things happen on this island that seem too unreal to be true. But, in Jamaica, these seeming unrealities are real: they are our daily bread. What makes me laugh more is that we have people doing what they think are serious things but it’s just a scene in a farce. Let me give you a real and present example.

Yesterday evening, on our daily radio news and current affairs show, Beyond The Headlines, host Dionne Jackson-Miller was dealing with the latest in Jamaican crime horror: men dressed as police and driving a car with flashing blue lights had stopped and robbed a motorist on Sunday evening on East Kings House Road. Now, I’m not making light of the crime and the horror scenario that faces us if this becomes a trend. I am going to make light of how one of our ‘finest’, a police spokeswoman, saw the solution for the average motorist who may fall foul of this new scam. The officer suggested that, if the fake police signaled for a motorist to pull over, then various options should be tried, if one believes the police to be fake. Her preferred option was to somehow indicate to the cops that you were going to drive on to the nearest police station. Her assertion seemed to be that if these were real cops, they would understand and follow dutifully to then press the charges, and (I presume), if they were fake, they would hightail it instead of walking into a possible arrest. What could possibly go wrong? Well, it was clear that the lady did not have a clear idea of what she was really suggesting. Now, I will date myself by saying my mind rolled straight to a scene from the days of silent movies, from the Keystone Cops. 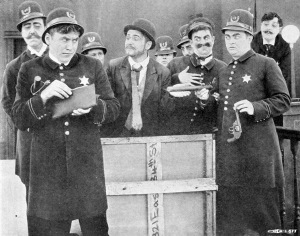 Dionne saw problems straight away and asked how the real police would know that the motorist had this plan and was not seeking to flee the scene. Wait for it! The police lady suggested signaling to any oncoming police car or other bystander that this was a ploy to go to a station. I presume the implication is that you carry a placard in your car that you can raise and wave out of the window reading ‘I’m heading to a police station. Don’t shoot!’ Well, that could be tricky to manage on a busy afternoon in Kingston, or if one were driving through Trelawny, where the likelihood of seeing another police officer or passing car is as rare as seeing an elephant knitting on the side of the road. Her other suggestion, when DJM queried the realism of the first offer, was to call 119 to alert police central command that you were ‘bringing in’ some police officers. Well, what I have heard of the responsiveness of that service is filed under ‘Don’t do this if your life depends on it’. The silent guffaws that could be heard on the radio set were deafening. But, the spokeswoman wasn’t done: she also suggested to use the StayAlert app. At that point, I had to pull false teeth out of the chicken foot soup that I was just drinking. Don’t worry about someone picking up the phone, just jump on the Internet superhighway. I’ve never used the app without data, but I hope it’s possible, because if not…

Now, I’ve presented these answers as if they came smoothly. They did not. They came after what seemed like a decade of reflection.

Did the officer really understand that if the fake cops were fake that this ruse would not work? Did she realise that real cops would be faced with the choice of apprehend more forcefully or apprehend much more forcefully. Maybe, what we need is a national roll-out of CB radios so that every motorist could speak over a dedicated channel to the police central command to report incidents.

Now, Jamaican police have earned a reputation for not being the most friendly and courteous and even been labeled in various ways for extrajudicial killings, so I presume that somehow the collective consciousness of society will be wiped clean of this when the suggested ruses are tried. 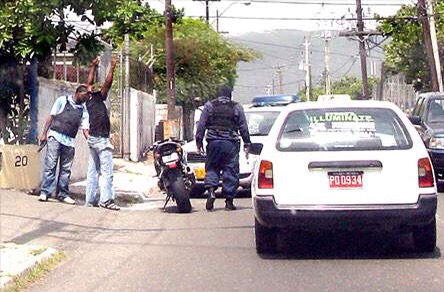 Somehow, I don’t see many motorists trying this. So, really what to do? I suspect that more suggestions will follow from both the JCF (after more reflection) or from the travelling public.

But, that was just a taster of what goes on for daily life. It’s the stuff that it’s hard to script, yet it gets trotted out every day. So, here’s my suggestion.

We need to revamp our tourism product and turn the whole country over to any and every television company that wants to come and film daily life in Jamaica, and the kicker (risky though it may be) will be to offer participation in these real-life events. So, we could have Minnie from Minnesota being taken on a drive so that she could be stopped and searched by Jamaican police. Or, we could have Orville from Orlando getting into an argument with a vendor in Coronation Market, and dealing with that on the fly. (We could have people prepped with audio so that they could get instant translations from Patois, for those tricky moments, that just don’t crop up in Peoria, such as ‘Let be beat some sense inna dis r*** c**** Hamerikan!’) We could offer attractive packages that had 3 days of sun and sand, followed by 3 days of ‘living the Jamaican life’, and one day of RR before heading back home (assuming nothing had gone wrong and a court date was added to the schedule.) These trips would have thrills and spills and authenticity aplenty.

Now, this may not be everyone’s idea of getting to know a country, but why not give it a try with some pilots in a few of our more interesting communities? We need to get buy-in from many agencies, but I’m sure that once they see the PR, job and income opportunities of being seen as part of rebuilding of Jamaica, they’d be falling over each other to sign up first. Taxi drivers (red plate or robots) with live audio and visual? ‘Small up yourself, sah! Road!’ The evening rush hour bus ride from Half Way Tree to Spanish Town? ‘Why you cock up you foot pon di seat an you see me a look siddung beside you?’ Riding at speed without a helmet (with or without flip-flops) from Montego Bay to Negril, with a stop at Rick’s Cafe? The options are almost limitless. Every community has something to offer. Instead of bucolic stuff like rafting on the Rio Grande, or the limited thrills of climbing Dunn’s River Falls or bobsleighing at Mystic Mountain, we could offer ‘being frisked in a ZOSO’. Can’t you see the excitement of people’s faces, knowing that this would be real, but only temporary?

Imagine: Selfies with squaddies. Wouldn’t that make friends want to fly to Jamaica in a heartbeat?

I’m not going to try to figure out how all of this would work and how it would be priced and all the insurance liability and diplomatic incidents to anticipate. But, our not-so-humdrum life would be a thrill-a-minute for anyone like Olaf from Oslo, coming from the deep midwinter of only four hours of daylight in Norway in December, to ‘let’s drive through potholes in St. Mary’, with warmth and the magic of roadside food along the way.

It’s a suggestion. If you think there’s a better way to get most of Jamaica wanting to be part of the solution let me suggest you come up with your own idea. I am going to draft a few letters to HBO and Netflix to use Jamaica as the setting for a series of reality series.

If you see me sipping gin and coconut water in Port Antonio sometime soon, remember, you had your chance to join me. 🙂