Among the many popular songs and dances in Jamaica is the ‘breadfruit’ song. Like many things in Jamaican life, it’s about a series of ‘this or that’ choices—we’re not big on the deep nuances—black or white covers most views. That goes too for politics, where the choice is green or orange, or in terms of voting symbols, head or bell. Now, I won’t pretend to having been brought up by nuns or having to live a cloistered life, so for me the choice between head or bell is really about more of the same just called differently. If you don’t know what I mean, I suggest you go into a men’s locker room and rummage around with the players and I think you will *see* what I’m talking about.

Let’s get something crystal clear: Jamaicans do not go to the polls weighed down by policy choices between candidates or even parties. It’s more about what’s on the menu: curry goat and rice (maybe, white or rice and peas); fried chicken and curry gravy, with rice and peas; maybe, some soup—mannish water or red peas. There! Voting issues resolved. Now, that is not a cynical glance at what is a known piece of corrupt practice, just *on the ground* observations of what’s left after political activists have passed ‘this way’.

Now, three by-elections are due to be held on October 30, but you may be forgiven for thinking only one is being held—in St. Mary SE. Let’s humour the Electoral Commission and just focus on that one seat, a moment.

All was going swimmingly with a little bit of political fighting about why and when a road improvement project needed to be approved and gotten underway. Pork! Food! Then, for reasons that could well be down to an excess of *white spirit*, a little administrative oversight got into the picture, as the PNP candidate was found to be a non-Jamaican and to boot a citizen of two other countries. Yes, yes, they’re both Commonwealth and that means they are not necessarily ‘foreign’ in the way that the British reconfigured The Empire, like the EU but without Maastricht Convention and certainly no visa-free entry between the countries. So, along came Shane, call me ‘Sugar’, Alexis, aka ‘the man who’s Canadian, Grenadian, but not Jamaican (I can’t take time to line up to do that), ready to serve you, faithfully’. Think about that and if you have doubts about the ‘faithfully’ part check out the Yello Pages for the PNP’s National Executive. If I did not know better, I’d think the candidacy paperwork had been entrusted to an intern, who scarperred at 4pm to go get a smoothie and head off to a yoga class, yelling ‘I’ll do it the morning!’

Now, all eyes are on citizenship issues, or the fact that a non-Jamaican could…just could…end up as the head of government in Jamaican. Oh, Canada! Without going too far down the road of possibilities, I just hope that if Seamus O’Alexagoran gets elected that Justintime Truethough doesn’t get an invite to Kingston and create an embarrassment of our PM singing ‘Oh, Canada’ with hand on heart and being silent when ‘Jamaica, Land We Love’ is played.

All eyes have turned to matters other than electoral issues in St. Mary to the how and why of this rather big faux pas (easy to understand if you are from Canada?). But, it’s a distraction, PNP diehards yell. Oh, yeah?

That paid ad by the man’s party tells you distractions are rife. 🤔 So distracting that the media needed to be informed that ‘citizenship soon come’ (see Gleaner report, Alexis submits citizenship application). C’mon, man! 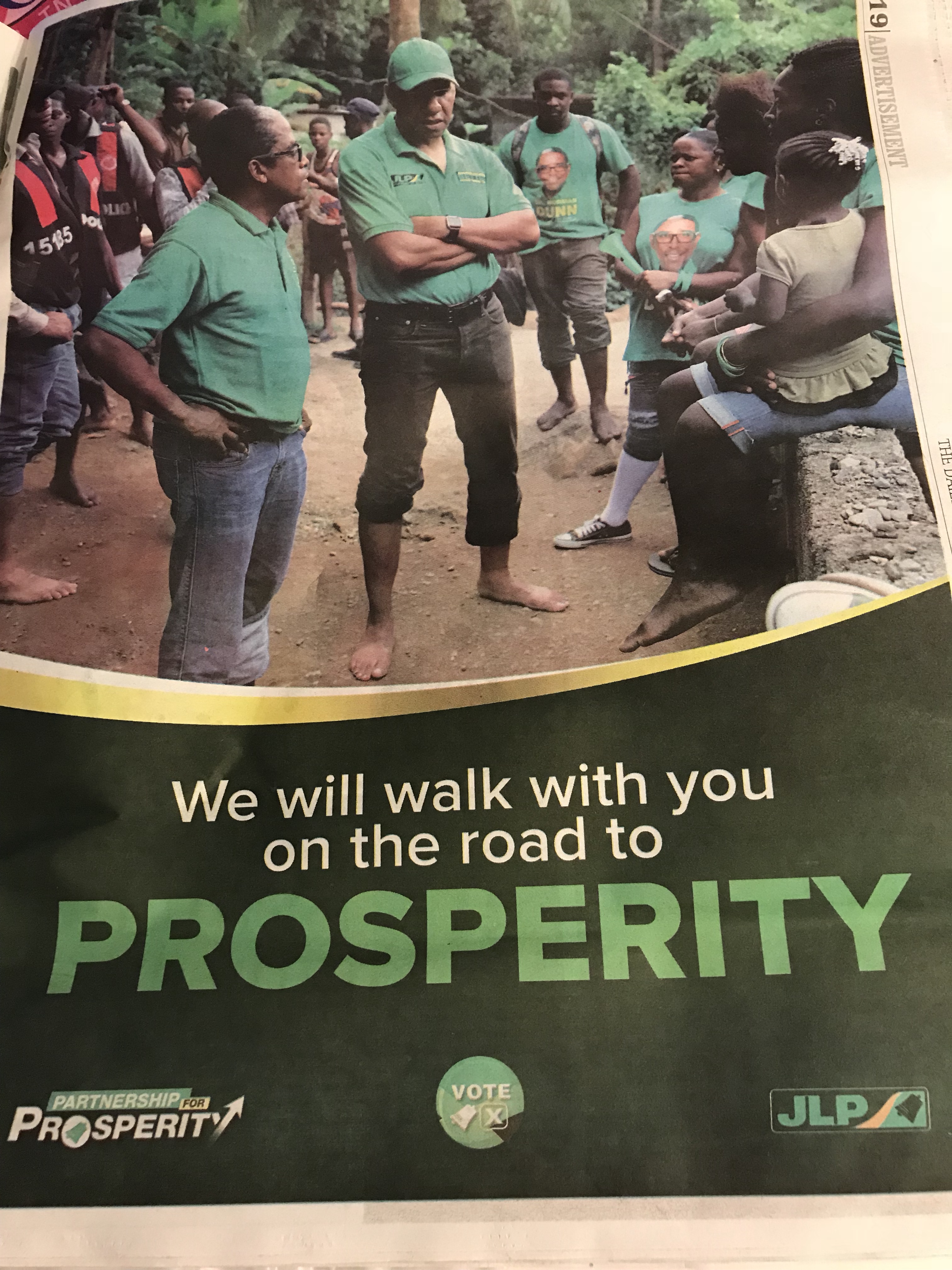 This latest piece of political theatre was…I don’t have the words…*ankling* for attention?…getting a firm *toehold* in the area…doing real *legwork*? I really don’t know.

But this kind of *foota hype* isn’t new, and barefoot (or feet in the water, to be exact) electioneering was already a thing.

But, as some commentators noted, walking IN water is not as extraordinary as walking ON water.

My father is from SE St. Mary and I’ve an aunt who came back from England to resume her life there. I know from a long time ago how bad roads, access to electricity and water, have been and still are in that area. Dealing with it, as so many Jamaicans still do, is part of our national resilience. But, politicians love to promise and then fly away after elections–though some have been using helicopters to get into the area (how convenient!). Just, don’t forget about the people and the promises after October 30. Otherwise, it may be a big foot up the jacksy that will send bells ringing in more than a few heads. 😦

2 thoughts on “You wan’ breadfruit? Roas’ or fry?”