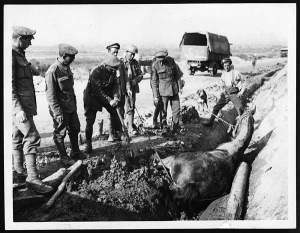 Depending on who pulls in a contrary fashion, in which direction, and for how long, we could get a situation where the horse stays stuck rather than moving out of the ditch.

This image strikes me as fitting what I think is going on in Jamaica, at present, and has probably been going on for some time. The horse is Jamaica (in its many guises, as economy and society). The people are all of us citizens (and for the sake of simplicity, I will call ‘citizen’ anyone interested in the future of the country). Note, that I did not say the future well-being of the country, and I will make clear why, shortly. The ropes are anything that can literally take the country from where it is now to another state, and a better one than currently exists.

As a country, it’s clear that we have several competing groups who want to tug the country in different directions. I’m not going to try to identify all of these groups–which is probably an impossible task because the groups could be as small as one person wanting to do his or her own thing. Think (with no slight intended) of a typical Jamaican country person wanting to live in the bush or the hills, far away from anyone else and content to farm his/her own piece of land, and feeling or actually being self-sufficient. In that sense, such people are not pulling against the rest of the country, but are not necessarily concerned to join in any ‘national’ efforts.

The obvious competing forces that I can identify are:

Those two groups alone cover a lot of what happens in Jamaica. They are very clearly part of many daily struggles, whether you are the gainer or loser in a bid for a government contract, or you are someone who has to choose between riding in a registered taxi or taking a ‘robot’ to school, work or play.

The problem with this divisiveness is clear from the image I first painted. We have a Jamaica tussling with itself on a daily basis. We cannot fix most of our problems because we have a bigger mass of people willing to pull against their solution. If one assesses comments about things that need to change in Jamaica, many go to how the ‘little man’ needs to be protected. That ‘little man’ is often doing something illegal, whether it’s stealing electricity, living on land illegally, operating a business that is unregistered and not willing to come into the formal economic structure, or a range of other things that are common in this little island.

We have a deep-seated culture of silence, so few are prepared to ‘call out’ those who are wrong doers, yet are ready to suggest that they don’t approve of wrongdoing. We are also a society that has many layers of close connections, so ‘calling out’ someone often means choosing to support a wider social need over a personal bond. We see that played out often, including recently in the case of a pastor accused of sexual abuse/rape of a minor, and how the principal of a girl’s school could publicly come to his aid and the support of her dear “friend”, his wife, yet not see how she compromised her position as the head of that girl’s school. We have not heard the end of that aspect of the story, but we have seen that duplicity is apparent in many elements of what took place and what people say took place.

What has been dubbed the ‘fight against crime’ is hampered by this culture of silence–on both sides of the fight. We can understand the fear that exists in those living in areas controlled by criminals, who are known to be violent. We can understand, too, the sense of ‘brotherhood’ that may govern the illegal activities of police officers seeking to ‘solve’ crime problems with a little bit of ‘jungle justice’.

Economic progress is hampered, too, by this tussle. The struggle between building an economy that is more highly formalized instead of one that has a large informal element is real. So many Jamaicans thrive on the informal–the fruit seller at the traffic lights who provides the daily healthy snacks; the crab sellers at Heroes Circle; the seller of fruit and vegetables from the back of a vehicle; the ‘friend’ who eases the way through a problem (bureaucratic or technical). Many would not use the word ‘corrpution’, but most of us have hands supporting corrupt practices. Our major problem is that these practices keep the cost of living lower than it would otherwise be, so to overturn it means a heavier burden across many lives, and a burden that many may not be able to support. That’s a tough Gordian knot. There’s no easy solution. One of the things I have pointed to is how we can seem to make progress by increasing inefficiency: filling holes in road, which quickly reopen and get refilled, shows up as ‘growth'(equivalent to ‘better life’ and ‘richness’), while our lives have been made poorer by the persistence of fundamentally poor road conditions. Real corrpution may be behind the contracting of such work, but it’s also corrupt thinking that this style of working should continue.

I know how some of these problems can be solved, and I know that many others in decision-making positions also know how to address the problems. But, I am not surprised that the necessary actions dont get taken. Again, connectedness explains much inaction. But, we have to either accept that we may inch ahead instead of moving in leaps and bound, or agree that leaping head may involve some serious national ‘pain’, if we are to make the necessary changes. I am not bold enough to say glibly ‘Take the pain!’

What I know from experience with countries that make dramatic shifts is that it doesn’t happen without that ‘national consensus’, which we do not have.