I’ve written before about a persistent feature of Jamaican life that is dragging our growth and progress downward. It’s a set of simple inefficiencies that affect everyday lives and waste time and effort. They reduce productivity because of some simple little things. Sadly, their existence can continue and leave us with the illusion of progress when in fact we are standing still, or worse, regressing.

I pointed out previously how our regular ‘patch and mend’ approach to road repairs is literally the old style ‘dig a hole and fill it’ kind of economic activity. In our case, the weather and some usage dig the holes, men and machines fill them; weather and usage dig them again in less than three months; the repairs are repeated. So it goes on. The data record income, spending, and use of materials and labour and we will see higher numbers for national income, aka GDP. But, the economy hasn’t grown in any meaningful way. Traffic delays and damage to vehicles are eased for a while, then reoccur. The repairs make no fundamental changes: the road base is still weak and prone to deterioration.

So, a year on we may see a so-called upturn in GDP but it’s a fiction.

One of my concerns about the government and the Economic Growth Council is that the growth ‘strategy’ talks about not repeating past mistakes but leaves them enshrined in the country. You don’t need to be a brilliant person to see how this status quo suits lots of people. It’s money for old rope–a kind of great swindle.

One can take a certain view when such things are set in the affairs of public sector agencies. But what to do when they’re cemented into private sector activity, too?

Flow is not my favourite corporation for a simple reason: it enshrines inefficient practices that are easy to fix but are left untouched and customers just have to live with them. Competition hasn’t forced Flow to be more efficient. Here’s another strike against them.

Early yesterday, I noticed that I had no wifi service at home. Everything seemed fine with the devices, but the essential connection to the Internet was missing. The TV was working fine, so it appeared that all was well in Cableland.

I contacted Flow via ‘chat’ and then via Twitter.

Chat generates an email exchange with a promise of attention within 24-48 hours. So, it’s not a chat at all. Fix that!

My Twitter exchange had more immediate results and highlighted that no technical problems showed up in my area but the matter was passed on another department who would get back to me once the problem had been identified. 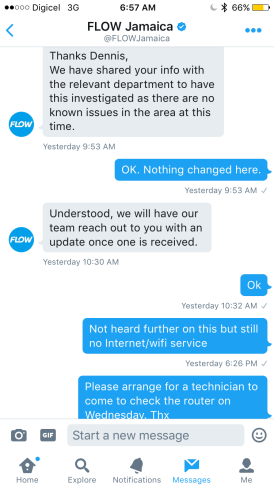 Up to 9pm last night, nothing had changed. I used my data plan all day. I tried to help my daughter to get internet service to do her homework. No joy.

Early this morning nothing had changed after the usual solutions had been tried and all devices shut down overnight and restarted this morning. So I tried to call Flow. My house phone told me service had been suspended. I called them from my mobile. After some checking on the account, I was informed the problem was due to a bill being overdue. The first step, apparently, is usually to call or advise the customer and then suspend service. Not all services, though. Interesting.

I’d never been informed. No one I contacted yesterday had any flag on the account that showed it had been suspended. If that had been the case both I and Flow employees would not have spent time searching for technical solutions to a financial problem.

The agent apologized for the inconvenience and said she’d pass on the point about ensuring customers are advised.

With all the powers of telecommunications at their disposal a way must be there for the simple message to go to the customer. A banner on the TV screen? A text message? An email? A call to the line associated with the service? They know how to find us.

But it’s part of the corporate MO to not do such simple things. Why? Time wasted is an economic good, now?

The company would rather have its customers and some staff running around aimlessly. Why?

That’s a lot of wasted effort on a regular basis that doesn’t show up as retarding economic activity.

If I had 20 employees dependent on Internet connection who were stymied because of a bill but thought we had technical problems, I’d be fuming. I’m fuming.

For all its PR the EGC doesn’t look geared up to solve problems of Jamaican corporate inertia, such as this episode shows. (I presume that the region suffers as Flow likely has the same practices throughout.)