‘Lack of finances stifling football‘ screamed a headline in today’s Gleaner. President of a parish (St.Elizabeth) football association cited lack of corporate support as the main reason for the parish’s failure to get a team into the national premier league. This coming from an area that routinely has one of the best schools football talents, St. Elizabeth Technical High School.

Last week, I wrote about corporate sponsorship being the lifeblood.

When I see what goes on normally in Jamaica, it’s clear that ‘the money’ usually flows to the winners. So, those who are clearly amongst our best have a very good chance of getting financial help. But, the report above shows that this is not always the case, even for a sport for which we would normally expect support and interest to be sky-high. What is wrong?

Last weekend, news flooded in that the Jamaican 2-man bobsled team had qualified for the coming winter Olympics, ending a 12 year absence since 2002. 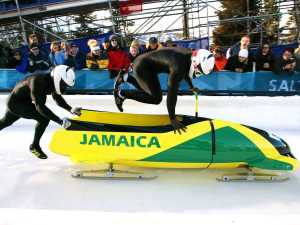 Lack of finance had hampered their efforts in the past, and was likely to hamper them after qualification. Then a strange thing happened. Within hours, I was seeing messages about raising funds–particularly, through crowd-funding. Fans of the sport got busy fast. Soon, the federation in the USA launched an appeal, accepting major credit cards, but also using Crowdtilt, Dogecoin (virtual currency) and Indiegogo. The team needed US$80,000 (to cover travel and equipment costs), and by Tuesday it had raised US$115,000. The government has since stepped in to cover travel.

The bobsledders are a special story in Jamaica, with the images of the Cool Runnings movie capturing in 1993 the thrill of the first entrants, in 1988. To revive that image was perhaps easier than getting the dry dirt of St. Elizabeth wet.

Jamaica is strapped for money. Think like this has to happen and with it a realisation that the old ways don’t work. Does it take the diaspora to be involved to get the party started? Maybe, but it’s about a mindset that is not constrained to tried and tested, and positioning that is outward-looking.

Jamaica needs a lot of that.