You get an interesting insight into faith when you travel and moreso if you stay in any country more than a few days.

Africa is almost split across its middle between the dominance of Islam (north) and Christianity (south); it has a close connection too with whether countries are francophone or anglophone but less so than the simple geographical split, as the linguistic layer cake later. That makes sense, given how Islam was spread by refugees from the Arab peninsula and then through Moor conquests coming down from the north.

However, many people in Africa have firm Animist beliefs–voodoo has its roots in Benin; worship of spirits is common. b, from Baga traditions) and her statue was placed facing the doorway for that purpose. (We’ve, since, always, had Nimba statues in our homes.)

You get to see Animism in the most surprising settings. Early during my posting in Guinea, I was invited to a football match, as a guest along with the British Ambassador, who was my neighbour. Neither of us had been in-country long. As a former player, I was fascinated to see a local match up close. The formalities all seemed normal, with my ambassador-neighbour doing the honours at the coin toss. Just when I thought the guests would leave the field and the teams get on with the game, someone brought a chicken to the centre, holding it aloft. After some chanting that I did not understand, the chicken’s neck was cut! Its blood was drained around the centre circle, then the man took it to the side. The field was new and had now been duly sanctified.

I’ve worked in both Islamic and Christian states, including Orthodox Christian Ethiopia. I loved living in Guinea; predominantly Muslim but also celebrating major Christian festivals, Easter and Christmas 🙂 Islam has had a long tradition of tolerating other religions. My secretary was a Catholic and all other staff were Muslims.

Seeing a world revolve around a weekend that starts on Friday and ends on Sunday was a big change only for coordination with my Washington or UK lives. The main prayers on Fridays shifts focus well. The reverence of Friday prayers was always evident by the glorious display of robes that day (boubous). My office closed at noon.

Living in a world where Ramadan and fasting drive lives is revealing. In my first year, I fasted the whole of Ramadan; it was tough. It was tougher than it needed to be because I didn’t know I could drink water, and I hadn’t learned that you should get up before dawn and load up on food 🙂 You don’t fool me twice! I cracked that the second year.

What Ramadan revealed was how the lower energy levels just drive down productivity; lassitude is just everywhere. I was lucky to break fast in the evenings (iftar) with friends and families, most days, which gave a much clearer meaning to what the prolonged fasting meant. The whole process is cleansing, physically and spiritually.

Guinea practised what I called ‘Islam light’. That was evidenced by the absence of extreme form of modest clothing throughout–long clothes were common forms of attire–to the extent that seeing bare-breasted women was commonplace. 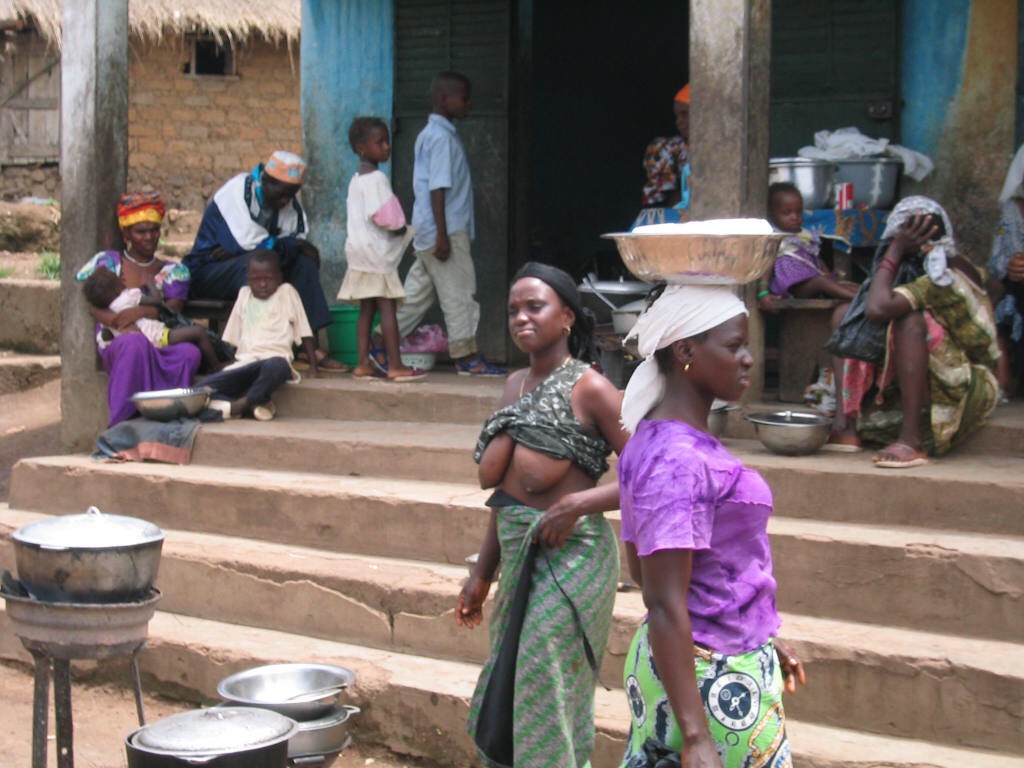 Black Africans are generally not ashamed of their bodies.

Burqas and all black attire were seen to any large extent only in parts of the Fouta Djallon, amongst some fundamentalist elements of the Peuhl population. Yet, even in the heart of that community, you’d see things like motorcycle taxis where women were riders and men pillion passengers.

Most Christians only know of monogamy as a way of life, whether formally married or not; many have a hard time with the idea of polygamy, when a man with multiple female partners, simultaneously. Well, the Muslim marriage allows up to four wives; it doesn’t give the reverse polygamous rights, as if polyandry were accepted. It took a while to understand how that worked out, and I did not have any judgments, but noted that for some men it was about raising the odds on creating a family, eg by taking on some younger woman(en) to add to his marriage. The tenet is that each wife should be loved equally. I don’t know what the test or proof of that is; it’s understood, though that the husband can and will have his favourite. Guinea’s president during my time, Lansana Conté, had three wives, one of whom was a Christian. Let’s not delve into the less-know area of extra-marital arrangements when a man has several wives already. 🙂

We attended a Catholic church in Conakry for several years, as a way of introducing our young child to Christian workshop. For me, a Protestant, that was no simple journey of faith, but the priest was a wonderful man and the congregation, mainly people from Sierra Leone was truly joyous.

One of my best Guinean friends, now departed, El Hadj Sow (who was secretary-general in the ministry of finance), was an Imam of great repute, who hailed from the town of Dinguiraye, a holy city for African Muslims. He taught me what little I know about Islam and the Quran. I was fortunate to speed several weekends with him, his brothers and, his family, when they had the tradition of taking each meal at a different brothers house, from Friday through Sunday. It was very simple and open and I have great memories of Rhian wandering into the prayer area and kneeling to join the prayers, something she was accustomed to doing at home when our household staff had their prayers 🙂

I know many Muslims who have been to Mecca for the Hadj; many more than Christians I know who have made any pilgrimage to the Holy Land.

The power of faith and religion was best brought home to me in places where it had been denied for years, the former Soviet Union. If nothing else marked regime change, it was people flocking freely to and in churches. Ironically, Soviet leaders had understood the power of Christian and other beliefs within Russia and the satellite states, and did little to damage the physical structures, such as churches or mosques, some of the most beautiful examples of which exist within that political regime.