I often wonder why Jamaican politicians aren’t taken to humourous task more often. I’m a lover of satire, and grew up in Britain during the era when political satire was resurfacing with real vigour in the 1960s (‘Beyond the fringe’, ‘That was the week that was’, Private Eye), through the 1970s (‘Monty Python’s Flying Circus’), and into the 1980s and 1990s (‘Spitting Image’, ‘Yes, Minister’, ‘The Young Ones’).

It’s not for want of material, because politicians are adept at putting their feet into their mouths at the drop of a hat. We also keep getting evidence that they do a lot of dipping elsewhere, sometimes into money pots, sometimes other honey pots 😉

Jamaican politics, even in the 21st century, is not too far from British politics during much of the period through the 1960s, where the population was extremely deferential to politicians, putting them on pedestals. The British system was built on the idea that there was a ‘ruling class’, mainly those close to nobility and often nurtured through public schools and Oxbridge, and closely connected personally. We don’t really have that pillar in our politics, though personal closeness keeps cropping up in our actual and alleged scandals, so nepotism and cronyism are there to be probed, humourous.

Ironically, Britain’s satire boom from the 1960s was created by well-connected graduates from first the University of Cambridge, and then the University of Oxford, who, perhaps, were well-placed to take down their Oxbridge political peers.

We seem to only have cartoonists who are ready to take regular jabs at any institutions, including the political class, but often as not, it’s one of the annoying public utilities, more recently, the Jamaica Public Service (JPS) who provide electricity. Today, is a classic example: 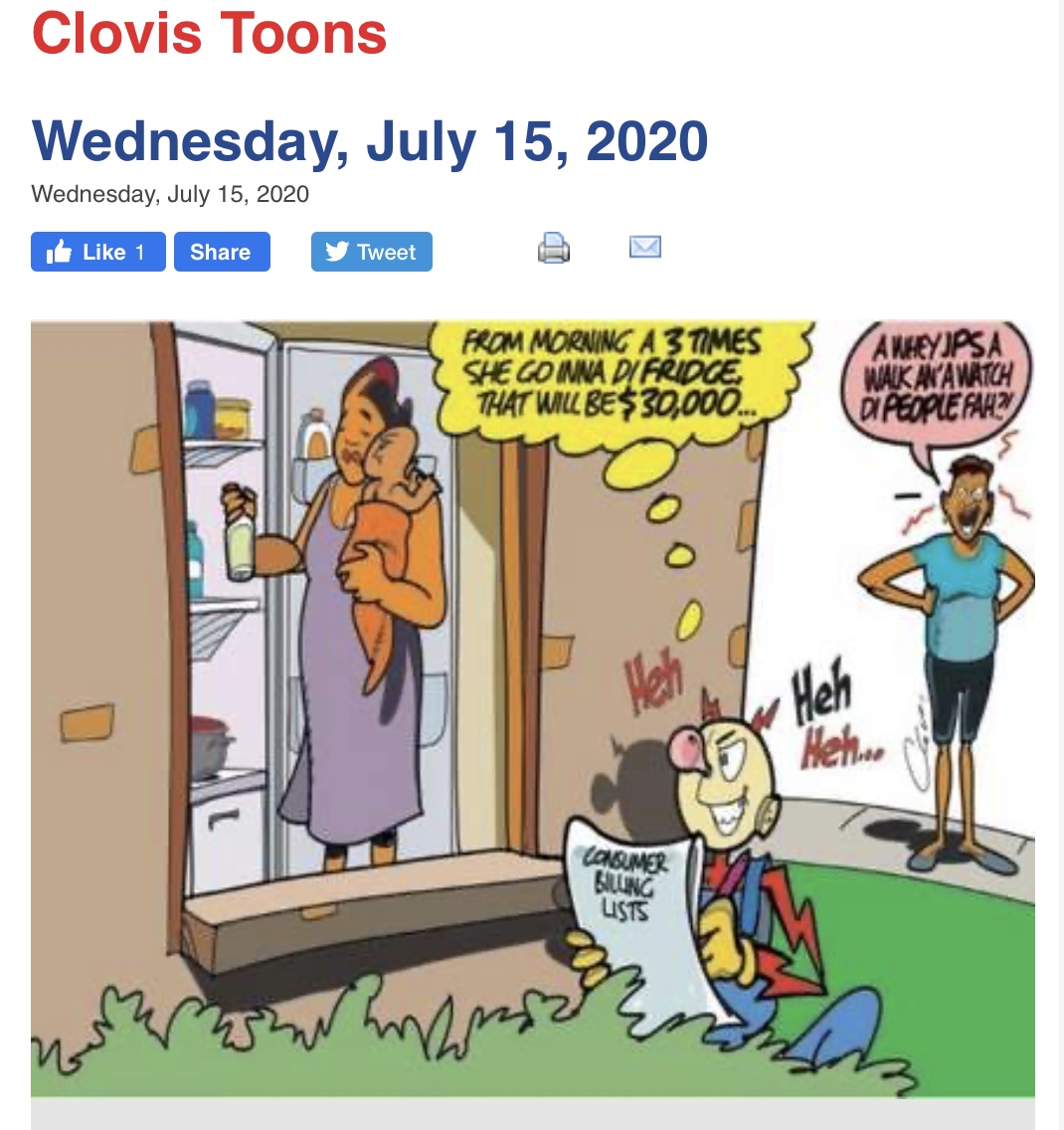 Why, for example, is the ‘sleaze’ and ‘scandal’ that so derailed many a British politician not a thing that rips apart Jamaican politicians? These aren’t new traits in politics, and if one traces the UK’s history, it’s easy to see how this has risen each decade since the 1960s. For sure, little seems to drive Jamaican politicians to resign, in contrast to the UK—though, unusually, we’ve had two Cabinet ministers say a premature ‘Sayonara’ from the current administration. Was Teflon invented in Jamaica? Little seems to stick to the Jamaican politicians.

The best of Clovis, not one to shrink from offending, in general, from the past few days, shows that even he’s pretty polite: 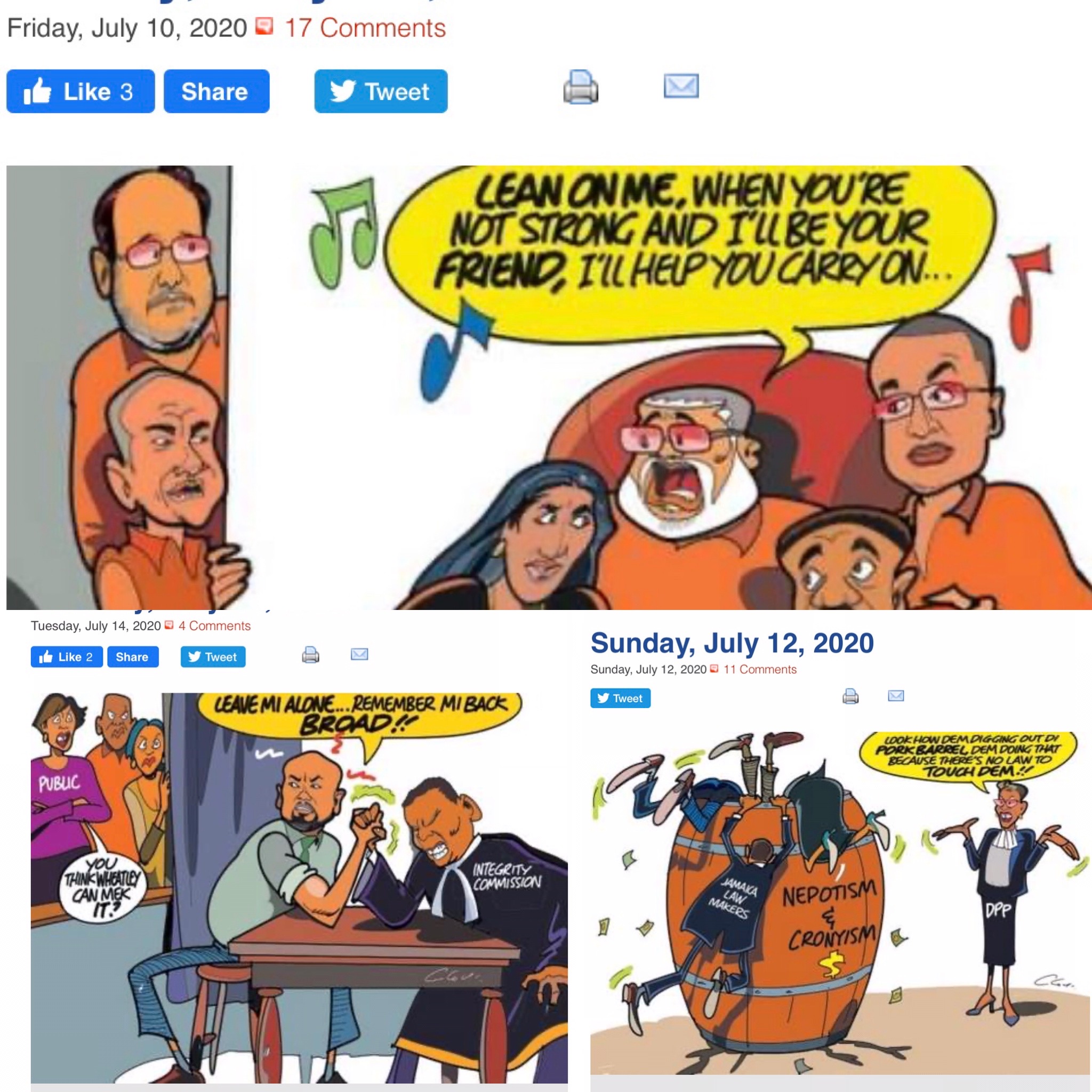 No one can forget Peter Cooke speaking directly and mocking PM Harold McMillian sitting in the theatre, or his take-down of the pompous and disparaging attitude of the Conservative Party:

Is our reluctance based on our closeness to each other? Six degrees of separation is clearly evident.

Haven’t we repealed the laws on criminal defamation? What’s holding us back? I’m sure that, as soon as the whiff of embarrassing acts come to light—and that’s lightning fast with mobile devices and social media—the jokes are being shared, privately.

With general election and local election looming, let’s hope that some step up to the plate to stick a few needles into the skin of the political classes. Meantime, it’s left to the wagging element to nibble away and the thin crust of cover that exists outside Parliament 😉