I was a silly primary schoolboy to try to empty the vacuum cleaner down the toilet: it was a simple conclusion that the dust collected in the bag would be fine and easily flush away, not compacted and likely to clog the bowl and make it overflow. “Yes, Daddy. I did it. No, Daddy, I didn’t realise the bathroom would flood.” Bway, gwaan a yuh bed! 😦

But, it’s a different order of ignorance that leads to my hammering a nail through a floorboard and into a copper water pipe in the roof space. With water jetting towards the roof, the challenge was to figure out how to stem that for a while, get downstairs to turn off the main supply and return with something that would be a better temporary stop for the leak. Then, to find a way to repair properly the pipe.

But, I found a rag to replace my finger to stop the leak and figured out how long it would take to dash downstairs for something like soldering tape–30 seconds–and that would allow a lot of water to flow out and soak the ceiling enough to compromise it. Well, plug, run, find, dash back upstairs and wrap. Phew! Now, time to mop up. Come evening, “Hi, dear! How was your day?” 🙂 A leisurely drive through the cane fields of St. Kitts was as idyllic as things could get, until…The tracks just seemed to merge into each other, so how would we find our way back to the main road? Check the location of the sun and remember from which direction we’d come and drive as the sun dictated to go south to the coast.

Phew! A night in the cane fields was not in the plans and did not need to happen. 🙂 Have you ever seen one of those horror movies with people trapped in a cornfield maze? No? 😦 Please don’t tell me that you knew that the VW Tiguan automatically locks itself when it has been left unlocked for …. So, while I was at Cinnamon Hill Golf Course about to help at a pro-golf tournament, I parked and began to put on my walking shoes. I was too close to a wall on passenger side, so got out and walked to the driver’s side; the car key was on the seat. I went to open the driver’s side door…It was locked 😦 Two hours later, having tried most car-theft methods known to men on the north coast, the coat hanger wire with its improvised hook lifted the key to a gap in the rear window and I reached in to grab it. Don’t ask how the key got from the front seat to the floor in the rear. Don’t! 😦 Finally, if I offered you beer in a milk carton would you turn it down? If you said ‘Yes’, then I would say “You are so wrong!” After a good football match in Malawi, in the 1980s, our hosts took us to a ‘club’ somewhere ‘in the bush’. One of our opponents brought us some large cartons and said “Drink this! It’s Chibuku.” 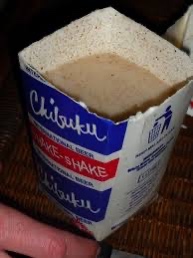 Chibuku ‘Shake-Shake’ (because you need to do that to mix it up well0 is a commercial sorghum beer based on the traditional Umqombothi homemade African beers, the main grains used are malted sorghum and maize but may also contain millet; it has the consistency of porridge. But..it…has…the…kick…of…a…mule. I know. The night was a total blur and the next day was almost as blurry. Spend a wonderful two minutes watching the commercial 🙂