Bank of JAMAICA took to the streets of Twitter to give an Econ202 tutorial on the foreign exchange market, reacting in part to talk of ‘crisis’ as the J$ crested 142 to the US$. It’s a lengthy and somewhat overdue attempt to educate the wider population. The thread begins here:

A temporary shortage in the FX market does not necessarily mean a FX shortage for the country/economy. #BOJSpeaks #FinanceTwitterJa A THREAD 🧵 pic.twitter.com/440G9P5dYw

Several commentators, myself included, have tried over recent years to point out that the exchange rate is not behaving in any abnormal way and has shown signs of maturity in the past two years by bouncing in a range between the 124-136 range. Some have even pointed out that the purchasing power parity (PPP) level–taking account of inflation differentials between the USA and Jamaica–of the J$ is currently 142. See Kevin O’Brien Chang’s Stop currency crisis talk! column in the Jamaica Observer, this week. 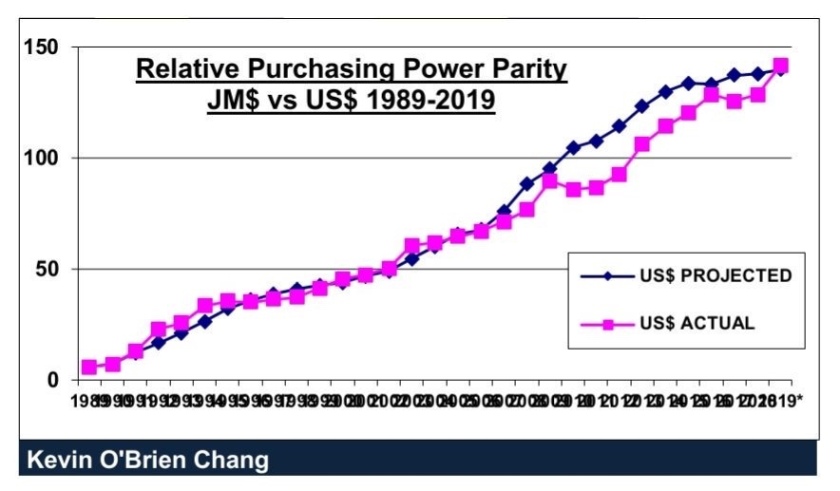 I suspect that these won’t stop cries of precipitous slide but it’ll expose the unwillingness to see things for what they are. After all, the exchange rate has been a great political football.

What the FX market needs badly are instruments to help people hedge better and lock in prices, eg using forward contracts. Why those haven’t developed yet needs an honest conversation with the central bank, financial sector and businesses. Obviously, the need is there as planning is better with reduced uncertainties.