I spent several enjoyable hours reflecting on my father’s life while I was writing Remembrances for his funeral, and I managed to put together a piece that was part chronological, part about characteristics. Not surprisingly, at this time of year, when we tend to reflect, at least on the year past, I’ve kept reflecting on my father.

Funnily, I did that every morning beforehand, because I do about 10 minutes of yoga/stretching. My father was never an athlete, yet after his return to Jamaica in the mid-1980s he got into an active regime that involved him gardening/farming, but also walking a lot, mainly across the Manchester Golf Course, but also into the centre of Mandeville for aerobics and yoga classes. As I was arching my back, my teenage daughter walked in–early for her. In mid-stretch, I asked her if she could recall seeing her grandfather do headstands; she said no. I remember seeing him do them for the first time and being astonished with the ease of his movement. He suggested I try the pose. 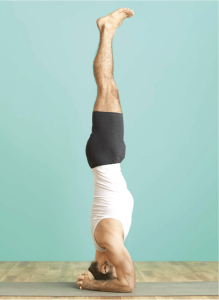 Well, I was never great at gymnastics, so was wary as I tried to flip myself up and over and get my legs to touch the wall, which was for guidance and support, as a beginner. After a few failed attempts, I was inverted. Then, he told me to stay there for a few minutes. What? He then told me to close my eyes and breathe gently. I’d be lying if I said I felt comfortable, but gradually I lost my sense of disorientation and relaxed. Daddy, then told me to come down slowly. I did and got into a conversation with him about the benefits of yoga.

I would never describe my father as a health nut, but during his retirement he focused more on his health and diet. He was a diabetic and decided to deal with that by controlling what he ate, a challenge for a man who loved to eat and to cook his favourite Jamaican dishes. Cooking on an open fire was one of his skills, and like many rural Jamaicans, could regulate heat without a thermometer.

Of the many changes I noticed during his time back in Jamaica was how he ate heartily but became trimmer-looking. Life in Jamaica is sweet, people often say, but that’s often reflected in a swelling waistline; I can attest.

My paternal grandmother and my parents taught me how to cook, but I can barely hold a candle to any of them. My gran could bake like a wizard, and would ply me almost daily with desserts she made, when she came to live with us in London: “Dem dont feed yu a school? Look how yu mawga!” she often said. 🙂 My mother taught me how to cook chicken, and I managed to get her to tell me recipes that I wrote in a book, so they can be added to heirlooms. But, my father was the king of seasoning food. I’d marvel at how he’d start seasoning a joint two days before roasting it, and his pot-roast pork makes my mouth water just thinking about it.

Despite all that, I can’t cook many Jamaican dishes, though my fried chicken is mean as is my take on fried dumplings and saltfish. 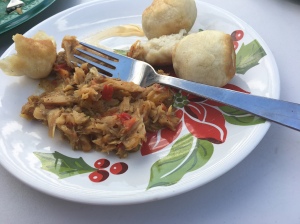 My Bahamian in-laws demand I cook this every visit. 👍🏾🇯🇲

So, bear with me if I get emotional sometimes over a meal; it’s probably full of great memories. I remember watching a documentary a couple of years ago about how some Asian cultures revere the memories of ancestors through meals, and there’s interesting research on links between food and memories.

So, in death there’s always meaning to life.

1 thought on “The world turned upside down”