Always look on the bright side of life. So sings Eric Idle in The Life of Brian:

So, the birds are coming home to roost, in the week after my father’s funeral, or the bills are landing hard and fast.

‘Today, the average North American traditional funeral costs between $7,000 and $10,000. This price range includes the services at the funeral home, burial in a cemetery, and the installation of a headstone,’ reports a blog named Parting. That’s in line with figures cited by SmartAsset, when discussing possible insurance coverage.

My Daddy’s funeral was relatively straight forward, and save for a headstone, the actual direct burial costs have come to less than US$7000, so far.

But, in Jamaica or other places where people like to celebrate deaths, we know there’s much more to account for.

Now, it was a great 9 night, as I noted last week; my cousin did us proud again, as she’d done for my mother, her aunt, in 2004. This wake event is a given in Jamaica, and I said to those I’d asked to arrange it that cost wasn’t my concern and I didn’t need to know the details other than date and time; just make it happen.

My St. Elizabeth cousin who prepared the food told me she catered for 100+, after being asked to cover 60. She and two helpers cooked mannish water, fried chicken and fish, curried goat, rice and peas. Everyone ate heartily on the Saturday before the funeral. But, left overs also helped feed several over the weekend and mannish water was saved to add to the family lunch planned for after the burial. 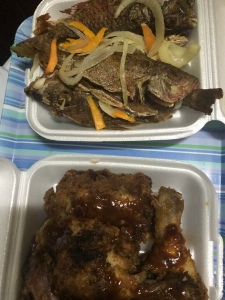 Drinks from the wake left plenty of leftovers for that lunch and still plenty remains to help make a merry Christmas. That’s a good return for J$115k for food and J$77k for liquor and sodas; that’s about US$920 and $620, respectively. But, you can’t put a price on happiness.

The repast after the burial was held at the church hall, and the caterers prepared for 100 people. A rough head count at the church and gravesite indicated around 120-150 people. All who wanted to have a meal could, including family and friends for whom a special lunch was available at home. But, a good number of family and friends couldn’t resist a cup of mannish water right after the burial and then the curried goat, BBQ chicken, fried fish and other food smelt really and was right there…😂🤔Even after serving so many, left overs were there to supplement the lunch. The repast caterer charges came to J$100k, including some tables and chairs. Happiness! The greatest gift that I possess.

But, the church hall has been paid for, and my father was a parishioner so we got it half-price. Oh, the organist needs to be paid.

The family lunch was donated by a close friend who owns a restaurant chain. I’m so touched by that gesture that makes the much-loved Jamaican phrase ‘good friends are better than pocket money’ real. 🇯🇲😍 I’d estimated 35 for that lunch but asked for 50 to be covered, and appetites were hearty.

Some of our Caribbean neighbours gear up some aspects of funerals just like weddings. Imagine matching outfits for the family and you’re right on track. We know that professional mourners are also popular with some people. Neither of these things took my fancy.

You decide if your pocket can stretch to the Bahamian offering, which I’m told could be part of a typical US$20,000 funeral bill.

Money makes the world go around? Believe it!