Last week, the Secretary General of the UN World Tourism Organization caused a few ripples in local consciousness with his chosen words about tourism, that resonated more than a little with the Jamaican location where he was speaking. Quoting from the report made by the Jamaica Information Service, Mr. Taleb Rifai, said:

“We cannot continue to build five-star hotels in three-star communities. This is a very important message we have to keep in mind. We cannot let our visitors live in bubbles; this is not acceptable anymore,”

Several commentators have been somewhat put out by this remark.

My own thoughts were initially some puzzlement–of the ‘Yea, right!’ variety–not least because of the ironic nature of the comment, but also some bewilderment.

Let me deal with the irony, first.

If there’s one thing we know about so-called foreign dignitaries when they visit it’s that they are often made to ‘live in bubbles’. Now, the reasons for that can be many, but they often come down to what gives the best impression of a country and makes most people comfortable in terms of the safety and security of the visitors concerned. At the extreme, such visitors may well be ‘housed’ in the residence of the head of government, or their ambassador (if a national on national business). More normally, they will be found in the ‘finest’ hotels that the country can offer.

Such concerns about safety do not rest only with high-ranking persons, but also with the ordinary visitors, who unfamiliar with a country want to avoid putting him- or herself in harm’s way, unnecessarily. Many countries find ways to deal with this, or at least convince visitors that it is a trivial concern. At a basic level, foreign diplomatic representatives try to warn their citizens of local dangers. Without citing the USA as the model, we can see how the USA, being the source of the bulk of visitors to Jamaica), cautions nationals.

Here is the safety and security advice given by the US Embassy for Jamaica: 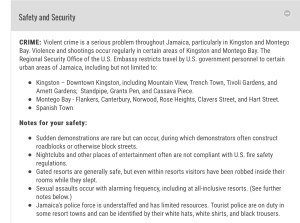 I wont judge that for accuracy or otherwise, but leave it merely to indicate how the USA sees the landscape into which its citizens will venture.

They offer some guidance on what is deemed ‘best practice’: 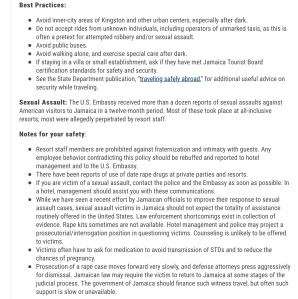 It’s noteworthy to me that the highest risks are flagged as being within all-inclusive resorts. So, if it’s so dangerous inside the ‘bubble’, are we to believe that it’s safer outside?

So, the visiting dignitaries tend to not stay anywhere but in the most-exclusive places, but also visitors are warned that to venture out into the general spaces of the country is riddled with horrors of crime and violence.

Now, we know that when people come to spend their time and money on leisure activities like visiting other countries, they do so with a little more of a cavalier attitude, putting many adverse things down to ‘the experience’ they may gain from foreign travel.

Horror stories come in many forms, and crime may stand as minor compared to some other things such as incomplete lodgings, unsanitary food and lodgings, or things like a lack of activities to make the stay enjoyable. For instance, no matter what one learns about Indian or Mexican culture and history, concerns often focus on ‘Delhi belly’ or Montezuma’s revenge’.

In the search for value for money, the ordinary foreign traveller comes in many shapes and sizes. Unlike the more rarified dignitary visitor. Moreover, the ordinary visitors has to look after him- or herself, not have needs met by hosts seeking to please at almost any cost.

The bewilderment part of my concerns were to think about what tourism has become. If we go back to Mr. Talai’s comment, I was struck by the ‘anymore’. Pardon me for parsing, but that suggests something was alright before. Now, change often does not happen overnight, and if the idea were to signal the need that the tourism industry as it’s manifested say in The Caribbean is in need of overhaul, then the comments make sense only if one puts some time frame of getting from ‘here’ to ‘there’.

My economist mind quickly went to the fact that nothing is costless, and to wonder what the new tourism may look like in its totality–visitor numbers, gross revenue, percent of revenues retained, domestic linkages, new transport investment, etc. I did not have an answer and I noticed that no one else seems to have put forward an answer that could suggest whether the new tourism would be as significant for Jamaica or less than it is now.

I was also bewildered because world tourism is not principally about small countries like Jamaica, but really about major industrial countries in North America, Europe and some of Asia/Australasia.

The UN WTO tell us that 2017 is on its way to a record year. The trend is showing continued demand for travel, after seven consecutive years of growth (unprecedented since the 1960s, according to WTO), projected at well over 1 billion travelers again in 2017.

But, little countries like Jamaica don’t determine world tourism trends, ie what that 1+ billion people want; we’re edging towards 4 million arrivals–that’s less than 1/2% of the world market. What we do is to try to attract as many of those visitors as we can reasonably support and get them to spend as much as possible. But, it’s the markets in North America and Europe that drive what many visitors will find acceptable. In other words, standards of luxury, attractions, mobility, safety, cuisine, and other things are really determined elsewhere, and you would be a rash country to think that by bucking those trends and tastes you will survive very long. Why? Because people can stay at home and get more for their bucks, euros and pounds.

While it’s nice to think about offering a wide and authentic local experience, it’s also fraught with many risks. It’s only a small fraction of visitors who are prepared to just head out and ‘live like locals’. At the best, they will be willing to sample local food and drink, especially if they have some recognition of them already; ie some penetration abroad helps. So, for instance, Jamaican jerk food has an appeal that would surpass other local delights such as cowskin soup, or even our national dish, ackee and saltfish (‘it’s looks like scrambled eggs’). They will also venture to local attractions if safety seems well assured; that assurance isn’t the same for all visitors.

Let’s not fool ourselves about racial perceptions, either, and how a mainly Caucasian set of visitors finds its comfort level in a mass of black or dark people.

But, part of skillful marketing of a destination is to find ways to get local things to be appealing to as wide a group as possible. That’s never ending. However, many visitors will happily default to things they know from home. Hence, the often-heard cries for ‘Where’s McDonalds?’ or ‘Where’s Starbucks?’, just as examples.

Jamaica does well in that it gets some 40+% of visitors repeating their travel to the island.

I wonder what inclusive tourism would look like in countries like Jamaica. Of course, it depends what you deem inclusion to mean–sectors involved, locations involved, people involved, range of countries from which visitors come, and more. Inclusion could also mean what the country can do with what it earns. That’s more than a bit ticklish, not least because most of the players in the business of attracting visitors are private enterprises, who may or may not put much of their revenue into the hands of national governments. Even if they put money into government hands, how much control do they, or could they exert over its use? So, the 30% of tourism revenue that gets retained is to be fought over, either getting more of it to benefit the nation, and/or raising that share to a higher level.

The world has changed much, and technology now allows many more people to participate in activities like tourism with little more capital investment than the home they already own. Ventures like AirBnB can now make many willing home owners into tourism destinations. Jamaica seems to be trying to get on this train. But, what does that look like or do to the overall market? While AirBnB may issue standards, do they stand up to scrutiny and/or match those offered, say, by hotel associations? Happy AirBnB customers, small in total, may not affect perceptions of the destination much, if the bulk of the market remains covered by formal hotels. Would the market be better if either government or a national tourism organization chose to oversee formally a sector such as AirBnB?

But, many Jamaicans, have done with tourism that they do with any revenue-generating activity in the island–latch onto it, most simply by ‘feeding’ on it as sellers of goods and services (call that ‘vending’). It’s style is often the well-tried, rough-and-tumble kind with shaky wooden structures and hoping that people with buy.

Tourism in small economies is often about managing the obvious tension between haves (foreign visitors) and have nots (locals). With few exceptions, such economies can neither match the average wealth of visitors nor do something more than (maybe not much) to manage to regular or season inflows of people that are many times the number of local residents. In such countries, it’s almost unheard of that hotels or lodgings aimed at foreign visitors will be open freely to locals. One doesn’t need to target ‘all-inclusive’ resorts as if they are essentially different from most accommodation for visitors. It can simply be a matter of how to manage people flows. In such economies catering for tourists is part of specialization.

Industrial countries can build tourism on the back of what they have already achieved. Extensive historical interests can be packaged to be more attractive. Medical facilities are generally of a higher standard so will attract business without being touted as a feature of a destination. Special transport isn’t needed because the basic infrastructure is well-developed. Climatic attractions are already part of local cultures, so things like skiing or boating or natural attractions have already a local base that is strong and can be made stronger by foreign visitors, as opposed to be being developed to attract foreign visitors.

I have some thoughts about the sustainability of tourism, which I may discuss separately, but as with inclusion, I know that sustainability can be defined in many different ways. So, while some may routinely think this means the environment, others may thinks it’s about financial viability, for instance. I’m always leery of discussing terms like this without being clear that I’m on the same page as others. I could easily say that a sector is sustainable if a decade from now it is still in the business of making revenue, providing jobs and demanding goods and services from within the country. That goes for any sector, not just something called ‘tourism’.

Leave a Reply to The Grasshopper Cancel reply