I spend a lot of time trying to explain to people that they have views that are contrary to facts. In the current world of the US administration, it’s timely, perhaps, to state that facts matter. One area where I bridle is when people say things like ‘I want to be like you when I retire, and can have time to play golf.’ I point out that, if one waits until retirement, it will be far too late. So, let me state this as clearly as I can, and if I’m not clear enough just look at the data for yourself.

Most golfers (based on US data)–nearly 60 percent–are people in the prime of their working lives (i.e. >30 and under 60/65); just under 40 percent are in the category that covers most ages when people are eligible for retirement (>60 years old). The demographics suggest that, if the bulk of golfers continue, many will have played golf through their working lives into the period when they are likely to be no longer working. 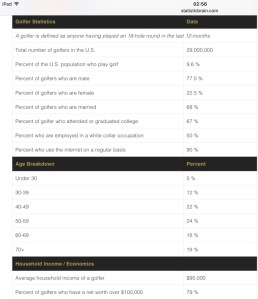 Most golfers are men, married, well-educated, likely to be professionals, and higher-income earners and have high net worth. So, golf tends to be for those who are financially better off in society. Earlier in my life it was accepting that notion that kept me away from the sport: I did not fit the profile 🙂

Anecdotally, in Jamaica, most amateur golfers work in the private sector and are in their own businesses. Few are civil servants. A small handful are doctors. Tourists (mainly from North America) whom I have met in Jamaica who are playing golf fit fully into this profile. I’ve not played much in Europe, but my limited exposure to golfers there gave me the same impression.

These sets of attributes cements golf as a sport for those who have more disposable income.

What’s often clear, to golfers, at least, is that playing a full round of golf may take time (say 3-5 hours), but that is something that those who are in control of their time can manage better. So, when someone reaches retirement, such control over time is more evident, but it’s clear that to have had the chance to play much golf before retirement: golfers needed to be able to play when (and where) they wanted to. More likely, the typical golfer is a business person who can decide when he plays. Classic examples are the executive or business owner who toggles golf with business activities (and networking may be part of that). I have a friend whose boss is a golf fanatic and he tells her to pack her clubs whenever they have to travel for business; he (and her) play golf as soon as as often as he can on the trips and make trips as often as he can. Anecdotally, golf courses in Jamaica have many local golfers playing regularly on a couple of midweek afternoons (after 1pm)  and at weekends. The vast majority of these golfers are not retired, but still at work.

So, seeing golf as a sport for retired people is a myth. Next time you see me and wish that you could be retired like me to get your golf game on, accept that you keep missing the bus. Get started on your golf game well before you retire!

2 thoughts on “Myths and reality: waiting to retire to play golf”