I can understand why a print edition limits the publication of comments from readers, eg letters to the Editor: there are real space constraints. I do not understand, however, why an online edition would limit the publication of comments, other than those that are clearly offensive or abusive: digital space is very elastic and almost limitless. So, I am puzzled by a practice I’ve noticed for some time with The Gleaner, which I have started to track, of not publishing online comments. Of course, I can only track my own offerings, but that is plenty for this issue.

I’m not backward in coming forward, as the British say: I have views on many things, or can form opinions on them, and I am not generally afraid to express those. I try to keep my comments ‘on point’ and not attack a person, but tackle the ideas expressed. Some say that I am eloquent. My comments can sometimes be long, but that’s usually because the subject matter and views expressed by the author are not simple, and I don’t pretend that things have easy solutions.

So, twice in recent days, I have expressed critical views–on a ‘Letter of the day’ about currency stability, and on a article about the BPO sector. I’m an economist, and both topics lend themselves to some simple and complex economic arguments. On the latter, I’ve had a vigorous discussion on Twitter with the author about the style of his ‘attack’ on the sector. I posted my comments early, but so far I have not seen them published. In the case of the former topic, online comments are now closed (it’s nearly a week since publication of the letter). Now, I know that the Gleaner sometimes converts online comments to letters to the Editor. But, I wonder what the policy is with my or others’ comments, which having been moderated, and consigned to somewhere out of the public eye.

Let me share links to the relevant articles, and my comments: I took care to make screenshots (and will continue to do so, for the record, going forward).

Letter of the Day | Currency stability crucial https://t.co/8QwDCzhciN To which I responded as follow: pic.twitter.com/AMePj1RlhV

For the record, I show the comments published on that letter. 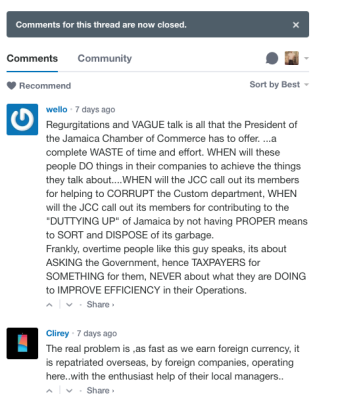 ‘Only’ two comments published, as of this morning?

The second topic was ‘BPO growth at what cost?‘, published on February 23. My reactions were written and submitted early that morning (and appear below, as a Twitter post). As of this morning, ‘only’ three comments have been published online.

‘Only’ three comments on BPOs?

My interest is several-fold. First, as an ‘editor’, myself, of online comments on my blog: I moderate all comments, and publish all, except those that are abusive or use offensive language. So, I will take comments whose content I know or suspect to be untrue, but then deal with them in my replies. I rarely delete comments, unless the author asks for that. Secondly, as a simple member of the public: I would like to know the full range of public opinion on a topic. Thirdly, there are some who think that they see ‘the world’ of public approval and disapproval in online comments, implying that these get published all the time: this is clearly a misunderstanding of what goes on.

For a range of reasons, I do not comment much of pieces I read in The Observer, but I will be monitoring my comments online and how they are dealt with in the case of that paper, too. For reference, comments I’ve made on a range of other news publications, such as The Washington Post, New York Times, or Times (of London) have always been published after moderation.

For further context, I have had letters published by The Gleaner, including several ‘Letters of the day’, and also had commentaries published as guest columns in The Gleaner and The Observer. So, I don’t believe they have a problem with me and my views in general. So, I’m more puzzled with what I see happening online.

I’d love the Gleaner to react and offer some explanation. I hope, sincerely, that the response will not be ‘It’s our paper and we can do what we like’.