If ever I thought a nation lived in the shadow of shock-to-come, it is Jamaica. I suspect that it’s not alone, but it’s beginning to make a habit of showing its proverbial underwear. To use the Jamaiacan phrase: ‘Blouse an skirt! ah weh dat come fram?‘ Jamaicans are forever the person standing on a branch, hanging over a river, who moves and the branch breaks, then says ‘How did that happen?’ You don’t beleive me? Just read the papers or listen to the radio or watch local TV and see how outraged people are about things that were sticking them in the eye, all along.

This is the country that keeps dumping garbage indiscriminately and leaving recipticles to collect water, then raises its collective arms in shock when they keep getting infested by mosquitoes.

This is the country that for decades hasn’t addressed its water management issues and goes through serial angst everytime the sun shines brightly and rain doesn’t fall much and gets a parched throat from crying ‘We need water!’

This is the country that has government entities, obliged to report to Parliament or Cabinet, who dont do that and are found to have wasted or misspent billions of dollars. ‘Heads must roll!’ ‘Where is the accountability!’ ‘Where is my beef patty?’ Tscups! Kiss mi neck!

Yesterday, was a classic day for saying ‘Backfoot! Is wha’ do dem peeple?’

The University of the West Indies gave the proverbial finger to the Public Administration and Appropriations Committee of Parliament (PAAC). UWI sent the parliamentarians PAAC-ing with a swift smack around the head: UWI’s Registrar sent a letter that gave the yah-boo sucks response that UWI ‘is a public autonomous regional body of which Jamaica is only one contributor‘ (other regional governments cough up a lot of dosh, too, mate). He also noted that because Jamaica contributes, the university understands the need for accountability and pointed the parliamentary committee to the Jamaican government representative on its finance committee. The letter noted a legal opinion it said was received from the Solicitor General in 2007 that reportedly said the university was not a government entity or department. The Registrar stressed that UWI is governed by a 1962 Royal Charter which makes the institution only legally answerable to the British monarchy, identified as the visitor, or its representatives. The chairman of the PAAC, was seen PAAC-ing around in irritation, blustering that…huffing that…beating his brow that…Stop your stressing! The government has been in bed with this arrangement for decades, so what’s the reason that knickers are getting a few degrees tighter? It has minsiters sitting on UIW’s finance and grants committee, and have been happily overseeing the existing financing and reporting arrangements. We didn’t need HR Pufnstuf to save us from our own laxness. 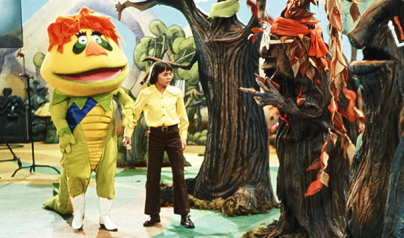 How about paying attention all the time?

Yet, this is the stuff of much of local politics, where people suddenly able to see better once they are out of office, as if the dust of reading all those Cabinet papers was getting into their eyes.

But, the population laps this up, and quickly runs to grab its collective pitchforks and start the first verse of the alternative national anthem: ‘What do we want? Justice! When do we want it? Now!’ Time to call out the national songstress for this, Rosie:

But, guess what? It can go on so. Why? Because unnu peeple like it suh! Day one…Eight more to go. Let’s focus on the next crisis. We don’t do real concern BIGLY, but love to make a HUGE fuss.