One serious problem we Jamaicans have is to understand the nature and value of criticism. By that, I mean attempts to give constructive advice, intended to improve performance. Good managers do this all the time, not least because a well-directed worker makes creating part of a well-functioning organization more likely. In simple economics terms, such an organization should outdo its competitors. That’s good for the current employees and/or owners and is good for the rest of the economy. If all organizations do this, they make a country a ‘place to be’, to work and invest. It’s easier to beat competitors; individuals win and so does a wider population.

One of Jamaica’s growth dilemmas is whether it wants to excel at sub-standard performance or move to a higher level. Having just enjoyed the experience of our excellent Olympic athletes, we clearly prefer the latter.

Lots of arguments can support not changing because the personal benefits of doing less than best is that remuneration (pay or profit) is usually more than deserved. I hope that’s obvious.

If sub-standard performance is allowed to be the accepted norm, organizations can still do well, but logically must be able to do better.

That brings me to the recent Olympics and the quality of commentary we received from ESPN in the Caribbean. This is not about any individual so I won’t mention any names.

Many TV sports broadcasts have or suffer from commentators that much of the viewing public dislikes, or thinks could be much better. Broadcasting companies keep with such commentators for many reasons.

Some reasons involve contracts and the cost of breaking them.

Sometimes, it’s an evolutionary situation, including that someone new is being tried. Blends of people work in different ways and take time to gel; formats change; and what the public experiences may be the result of things not seen on-screen. The broadcasting company may be like a duck on water and doing amazing work behind the scenes but we don’t see clearly good results. Our unhappiness results at least in lower audience figures and public criticism. At worst, the audience may leave, only to return reluctantly.

But, such criticism shouldn’t be viewed as some kind of national betrayal simply because the criticism is pointed at one of our own. That’s a kind of knee-jerk justification that risks accepting a lot of things that are truly awful.

A few examples of bad commentary experiences are worth noting.

Fox, US Open golf: having won the rights in 2015 to televise this Major tournament for the next 12 years, Fox started badly, both technically and with its commentators, and the whole package was deemed a disaster. Now golf is hard to commentate, but that’s not an excuse. The saving grace, if any, is that they have lots of time to improve. In the meantime, many viewers went elsewhere. However, Fox bounced back spectacularly in 2016. The big difference? American Paul Azinger was the lead analyst instead of Australian Greg Norman, and the rest of the broadcast team did well.

Michael Owen: Owen, a star striker at Liverpool FC and various other English clubs has had a torrid time as a commentor, and known to be prone to ‘gaffes’, many of which occur because the person doesn’t appreciate the silliness of their words. Read some at your leisure.

Fox’s experience with golf points to the risks that large investment in a bad venture can entail–lost market.

Viewers have preferences, so a commentator has to meet many needs, not all of which may be well-appreciated.

However, one of the features viewers seek is valuable information that is not readily available–that’s one of the expected benefits of employing someone who has been involved in the sport at a high level, such as a former Olympian, and whose access to athletes, coaches and administrators, and supposed knowledge provide valuable insights.

Telling viewers what they can see for themselves is often regarded as redundant; this is not radio, where much may need to be described. Viewers also want coherent comments: they don’t want to work hard to understand what’s being said. Accents can affect that, adversely, for an international audience, but again, can be easily addressed. There is also the difference between ‘play-by-play’ (action unfolding) and ‘colour’ (background and context) commentary.

However, a wealth of experience in the sport or even in the broadcast field does not guarantee success in the commentary box.

When things appear not to be working well, the management challenge is to change, do so decisively, and bring clear improvements. Commentary, obviously, cannot work well with no words, but useless words are not much better.

Ironically, bad commentary has its place, but it’s usually to be the butt of jokes, being lampooned, or providing parodies of what good commentary should be, such as some famous versions of ‘British’ commentary on American sports.

What we should not do–but seem to love doing–is to defend the evident lack of quality because the person has other great skills, or is ‘one of us’, and we ‘should be proud to have our nation represented’, as if these characteristics are the excuses we pull out because we can’t bear to acknowledge an error or hold someone accountable. Of course, both are traits of the Jamaican body social.

Being gaffe-prone creates many imponderables that can derail the best of projects. How much ‘foot in mouth’ is acceptable? How much time and energy should be spent correcting on-air or elsewhere series of spoken mistakes?

So, I hope that the people at ESPN take all the feedback and reflect on what happened, and see if they agree with certain criticisms. If they don’t then they have another issue.

As they go through this process, it will be interesting to see what of it they share with the public–again, we are lovers of ‘dont wash your laundry in public’ as if hiding your struggles makes you better. But, we get a lot of that in many walks of life, so don’t hold your breath.

So, while I was in Miami, and well placed to stock up on items much-needed at home, West Indian cricketers were swinging bats and flinging balls against India, just up the road. So, when I heard that bad light stopped play, I assumed the pending storms and heavy rain had taken another victim.

But, no. Lights were out all over my homeland. From about 6pm, the whole island was struck by darkness.

One of the great features of social media is its speed, and sharing critical information fast is essential. However, applications like Twitter are not universally used, and if you don’t follow someone, then you will miss their broadcasts. Unfortunately, utility companies cannot compel us to follow them and so be always in their loop. I readily share so that my contacts know what I know. But, word to the wise: follow the utilities and the police and the Office of Disaster Management, at least.

JPS are often under fire for the cost of their service, and Jamaicans have been spoiled in recent years, after many experiences with power outages, planned and unplanned. We are not ready for ‘all-island power outages’, less so, when we hear that it may be due to a procedural error. We await know who pulled what, when. Monday will shed light on all.

Of course, JPS were overjoyed to report that power was coming back slowly but comprehensively. 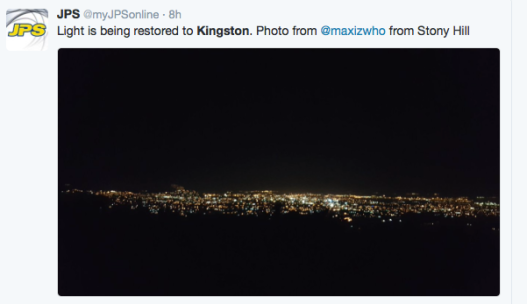 Poor things, it would have been great to show a picture of the outage, and see the little dots of light where people had generators. I could have tried to buy a container-load in Florida.

So, let’s hope that the journey that began with flight delays does not proceed with any other minor inconvenience.

Sorry! Being without lights for a few hours is a MINOR inconvenience. Being without electricity all day, everyday, or frequently, is hardship and reality for many. Some people may be a little miffed still at the outages that did not happen a few weeks ago because of non-Storm Earl. But, look, didnt some of the preparations came in handy, last night? Perhaps, a few hoped for longer delays so that the tins of bully beef and the hand-operated can opener could get an outing. People are never happy.

While, unlike the English, we have few lace curtains to twitch, but we look peeping into other people’s affairs (literally). But, what can you do when they don’t have lights. I think we should all write in protest to the Minister of Energy, Dr. Andrew Wheatley and JPS’s CEO, Kelly Tomblin, to insist that everyone be supplied with a mini storm light for their bedroom, so that next time there’s an outage, people can carry on with the important business of prying into other people’s activities. Before, anyone lashes me. The Commissioner of Police has demanded that we do it, so there!

They say Karma is a b****, and who told us to get all high and mighty in Rio and waltz off with the people’s prizes? You forget your place? Get back in that line marked ‘Under development’.