Here we are, again. 2016 is here, and this time the stage is Rio. Last time, the stage was London. The Olympics are here and small countries like Jamaica are rightly excited because they have a crop of athletes who have proven to be world beaters.  Where we have matched or beaten the world consistently, over decades, in Olympic sports has been in track and field. We have a clear story of how that came to be, and we can take heart from simple descriptors like ‘sprint factory’ to describe how we nurture athletics to the point where we are one of the world’s renowned ‘go-to’ places for coaches, training, and potential future stars.

This time around the four-year cycle, we are a bit more excited because we see a few stars on the horizon in what we call ‘non-traditional’ sports, namely swimming, diving, and gymnastics. Of course, these have been traditional ‘sports’ in Jamaica for decades; we swim all the time (and some people do that to make a living); we have people diving off rocks into the sea (maybe, it’s to please tourists, or to help them get the best catch of the day), all the time; we have people doing gymnastic routines all the time (though it’s often to the wild rhythms of dance hall music). But, are those ‘natural’ settings seen as stepping-stones to the competitive arenas? If not, why not?

We have very competitive formal swim teams, which have done well in regional competitions, and produced swimmers good enough to be tempted away to US or Canadian schools and colleges. From those ranks, we have had Olympians in the past, many of whom help to grow the sport. This time, though, we have in Alia Atkinson, a swimmer who has proven to be a consistent winner at the international level. We’ll see if her World Championship form and top-level performances in FINA events can translate into medal performances in Rio. Beyond Alia, we’ve this time Timothy Wynter in the pool, who’s another top level swimmer currently studying and swimming at university in the US. They are both Jamaican products, who are bettering themselves abroad. On the diving board and in the gymnastic arena, we have athletes who claim Jamaican heritage but are true products of other countries, namely the USA and UK. No shame there, but it points to something that we may need to understand, if we want to develop a culture of national and international success: some sports just are not well enough developed in Jamaica. Again, no shame there. We should draw on resources and talent where they are. We may get enough interest to compete and invest in development nationally as a result of what people see during the Olympics.

But, my eyes go elsewhere. Though not much mentioned, we have other so-called non-traditional areas that seem to defy logic in out inability to get over the hump in terms of developing athletes of world-class standing. One that comes to mind in beach volleyball. In fairness, our women’s volleyball team finished 7th of 12 countries in the final round of regional qualification for Rio, so did not get a spot at the big dance. 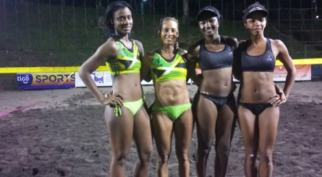 One question: Did you know this? If not, why not? We set up a dedicated area for beach volleyball a few years ago, but what is to stop there being such an area in every parish? I’m asking questions, and wonder if anyone has answers. The mere sight of a sport can do wonders in generating interesting in it. No disrespect to our current volleyballers. Have we really tried to trawl the many fine athletes we have who may or may not make it in track and field, or football, or cricket, to get them on the road to spiking and blocking on the sand? Have we sought out boys to take on this sport, or are we just focusing on it as another ‘girls’ sport’?

I know from personal experience how hard it is to develop youth players in a sport, but wonder aloud how often we put talent off by simply not giving much, if any, attention to making certain sports visible. In the same way that Caribbean countries open themselves to North American and European teams to enjoy our climate to train in their winters, we could do similar things with sports like volleyball. Personally, I think we do sports tourism badly, because we look towards too many ‘big events’ rather than many accessible events. but, volleyball is but one instance. I watch any sport that happens to be on 🙂 So, I look at the scrappy women’s rugby players and think (not cynically) of our feisty women, who could let off as much steam as they wanted–legally–on a rugby field.

I’ve other sports in mind, and they are mainly ones (like volleyball) that would appear to have low capital costs. How much does it take to designate an area on beach to hit a ball?

In passing, I note that the daughter of a Jamaican mother and Bahamian father rose through the ranks of that country’s volleyball programme to get herself a scholarship to play volleyball at a US NCAA Division 1 school, and she’s just turning a sophomore. Just leaving that there, as they say 🙂

So, I put the challenge out there to Jamaica, to ‘wake up’ and smell the coffee of new sporting ventures.

PS: As a small nation, with few resources, Jamaica should not give itself the luxury of denying athletes who make the well-developed international standards for events like the Olympics or World Championships, yet do not meet our (arbitrary) ‘top 3’ selection criteria, and replace them with athletes who have not made those international standards. That is wanton (human) capital destruction. JAAA needs to have a real serious rethink about what it did to Jason Morgan.