I have only seen a sea turtle once – a Green Turtle, from a glass-bottomed boat in Negril. It was a fleeting glimpse of a fascinating creature, which looked like a painted mechanical toy. 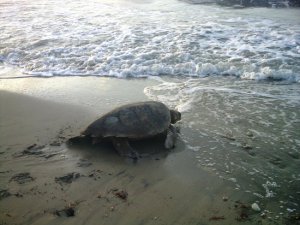 A female sea turtle returns to the sea after laying her eggs. (Photo: TripAdvisor/Oracabessa Foundation)

Sea turtles were once abundant in Jamaica. In the 17th century, and especially in the Port Royal area, there was a “turtle industry.” When caught, they were kept alive in a “turtle crawle” – a hollowed-out enclosure near the sea, where the turtles could swim freely but could not escape; rather like the Dolphin Cove tourist attractions today, except the wild dolphins are required to perform tricks, not be eaten. Turtles were also shipped to England, and…

1 thought on “#AToZJamaicaChallenge: T is for Turtle”