My in-laws are visiting Jamaica; that meant 15 people arriving in the airport in Kingston dressed in matching blue T-shirts with the family name on the sleeve and a large T on the front. While some politicians in Europe worry about ‘swarms’ of illegal immigrants breaching their borders, Jamaica puts on a friendly smile for this band of cousins coming from Nassau.

My wife’s family, in all its forms, is very tight. That means when they move it’s like a big ship, not a dingy, and that’s a slow manoeuvre.

That side I’ve known for years. What this reunion is unveiling is something unexpected. I’m always fascinated how people can live together for years and still have common habits that are unknown.

“I can’t buy three oranges!” said one sister, “They have to be even numbers, so I buy two packs of three.” I already know one sister well who cannot eat an orange unless it’s cut into four segments. “How else would you eat it?” I also know that grapefruit can only be eaten baked in the oven and sprinkled with sugar. Wow! ACDC central! But, I shouldn’t be shocked. I know a woman well who cannot abode buttons that have come off clothes.  That’s called Koumpounophobia. 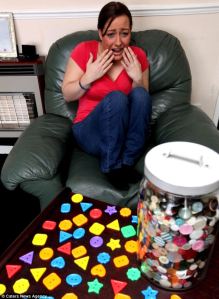 But, these things are part of getting to know each other better.

Cozying up is rarely smooth sailing. If I were a psychological expert I’d make the study of family dynamics my field.

One thing I note, coming from the special position of an only child, is how pecking order and roles shift, sometimes subtly and without contention. My in-laws have some great skills that are not all too obvious. One sister is a figures whiz and became an accountant and is ‘Miss Finance’. Another is the ‘Bargain Queen’, which is figurework to another degree: eight rolls of kitchen paper (1000 sheets) at $4.35 a roll is better than 6 rolls (850 sheets) at $4.15 a roll? Go! I love it when they go shopping. The myths whiz hates grocery shopping so the bargainer wins out, whatever. Then, there’s ‘The Manager’: I’ll be honest, I got scared when I heard about a spreadsheet of activities and even more afraid when I got it in an email attachment. No sooner had I read that I could play golf on Tuesday than a ‘revision’ arrived. That’s it! I wasn’t opening it: Tuesday works fine.

But, woe betide you if you think you can ingenue what’ll be for dinner. While all of them have great palates, some have greater skills in buying, preparation, cooking, serving, table layout. If a robot were built with the combined skills I think it may have its arms spinning around in many directions as befits the varied preferences of more salt…less salt…Kosher salt..sea salt…garlic salt. Ok, we’ve got salt sorted out? Now, pepper: white pepper…black pepper…goat pepper…pepper flakes…seeds out…seeds in…pods broken…pod cut. Pepper done? His many other ingredients? Anyway, which recipe are we using? Mummy’s. Grandma’s? Aunt May’s? Delia Smith? Martha Stewart? “I’m vegan!” “Only organic!” “I see MSG…” Good time to call those nice people at Island Grill 😇

All of this is meant to be read in good humour. Holidays are meant to be fun and relaxing, but as we discover each Christmas or Thsnksgiving, thin veils of irritation often get exposed. So, I keep watching and listening. I say to my younger daughter to avoid being surprised by the obvious. If all of this is getting too much, then do the smart thing and find a quiet room. Otherwise, sit back and enjoy the ride.

I’ll pause at lunch time. Many went out early for sport activity. My wife and a brother-in-law went to play tennis. Her brother didn’t make it because he’d disappeared from his villa! Unknown to us, the AC had broken down and the Jamaican heat was just too much, so he and his wife had been rehoused in a part of the main hotel. I’d gone out with friend for some early morning golf. We got back when some had taken a quick dip in the pool after breakfast. But, lIke a holiday version of Goldilocks, people get accused of all sorts of domestic sins: “Someone with a wet bottom has been sitting here!” Your imagination can take you where it will how that observation went down.

2 thoughts on “All in the family”