Unless you’ve paid no interest in how the world has worked for many centuries, you’ll realise that power over other nations is something much sought after. Few countries have never been rulers or ruled. The roles have changed over time. Some will know, if not remember first hand, that the Romans, Greeks, Ottomans and others, we’re once the big Cox in the yard. Those who were ruled by them have many signs left behind. England, for instance, has some superb straight roads, wonderful open air baths, and lots of place names, thanks to the Romans. The world seems generally happy to live by Greek political principles of democracy and their ideas of sportsmanship. The Ottoman Empire helped spread Islam, and influenced literature, cuisine, architecture and more.

Fast forward. We are now in an age where old nations and cultures are again to the fore, as China finds new footing and ways to influence others. New powers are flexing their muscles, as the USA revels in its role as modern world ‘police’ and ‘standard bearer’. The remnants of Rome, Athens and Istanbul are now languishing, as economic plight has pushed them from the penthouse to the lower floors.

What’s worth remembering about power in the world, though, is that it has not often been about mere land and population size. India has barely been a ruler. Britain sustained an Empire for around 500 years. What passed for economic power, and military clout, ruled over others. As those ruled increased, so the economic power increased, and the potential of the military power spread.

Small nations, in terms of size and economic power, have always felt hard done to. They tend to be always dependent. For many, the choices are limited, but also important in terms of where they give their favours.

Jamaica has long been in an interesting position, both geograpically and politically. We have long been at the apex of economic power players, not least, as part of the British Empire, being a source of immense wealth and also poised to help that spread and prevent it being diminished. We punched well above our weight for centuries. Even though the vast majority of residents were not able to wield personally that power, it had some influence on how people here saw the world.

Despite our faltering modern economic displays, we had politicians who moved past that to take strong principled stances that pitted us against a major power in whose shadow we live–the USA–or against a regime that seemed to have plenty of friends who were our main economic partners–such as South Africa and the UK in our stand against Apartheid. So, we have not been afraid to be small but stand up for ourselves.

We now find ourselves faced with another friend-foe dilemma. How do we deal with China, and what it is doing for us, and what it is trying to do for itself? The two are never far apart, but we do not always see the two aspects in the same way in other relationships.

Jamaica owes much to Chinese influence. Those who do not know this do not know how our country got to where it is. We have also been lucky in that Chinese influence, from decades ago decided to keep building within Jamaica as a part of the whole nation, not as an enclave. We do not have a country overrun by Chinese restaurants, but a well-developed food industry that has seen local Chinese influence deep in its roots. We do not have lots of small Chinese grocery shops, catering mainly to a small subsection of the country, but well-established grocery chains and supermarkets that provide goods for the whole country. We do not have a Chinatown; we have Chinese people living in our towns. In that regard, we are very different from other places, such as London or New York or San Francisco.

But, apart from ‘our’ Chinese, we now have to deal with ‘new’ Chinese, both small individual entrepreneurs (in wholesaling, for instance), or the giant state-sponsored engineering company, CHEC. Whatever people may think about the latter, it has put Jamaica onto a different footing. I would say better, if pushed. In the past, China help us by building a national stadium, and more recently built a stadium complex in Trelawny and gifted us a stadium in Sligoville. These latter two may be little seen or used, maybe, but that’s our fault.

We have physical constraints that CHEC has helped us bridge, in a sense. Their helping to construct a highway to make travel easier between north and south is not trivial, in terms of possible integration of the country and the economy. Their help with physical plant when needed, as was the case with dealing with a recurrence of a fire at Riverton in 2014, is both convenient and essential. They have enormous amounts of capital that we need, both financial and physical. Let’s not pretend.

But, we need to see us for what we represent. We gain from CHEC’s interest in physical projects. But, China’s overall interest expressed that way is miniscule. China has enormous resources, and its financial involvement through projects is tiny by comparison with its financial investments. Look how the British Virgin Islands and Cayman Islands see FDI inflows far in excess of those seen in Jamaica: they get billions of US dollars, while we get millions, and their status as tax havens is more important than ours as land mass.

We need China more than it need us, so our bargaining position is not so strong. We gave some coaching scholarships to China at G.C. Foster; well, let’s hope that we can keep our sprinting edge.

We are conveniently placed in the geopolitical picture, and it would be easy to see that a good economic foothold in the Caribbean is more of a good to China, in many ways. Whether our neighbour to the north is comfortable with that is not something we can control. 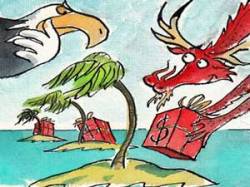 But, we are pawns in that big game. We are smaller pawns, really, because for so long we were economically feeble, and Chinese financing with less onerous conditions in terms of how we behaved was preferable to that from IFIs.  We had been naughty, and China was like the nice aunty handing us a chocolate rather than giving licks the way that grandma would.

If I were to identify a problem with CHEC’s activities in Jamaica it would be to be concerned about the constant unwillingness to be open and transparent about the arrangements which the elected government is making in the name of its electorate with another foreign government. Vague land transfer deals in exchange for road projects just smell funky. Of course, it would make sense for Chinese investors to put themselves in a position to benefit from the physical improvements they were making to the country. But, government’s unwillingness to give details is bothersome to me, because I have lived and worked long enough with government actions that are non-transparent to know that they are that way because they contain things that many of the voters would dislike. It often comes with a bitter budget pill down the road. It’s also an abuse of power.

But, generally, Jamaicans seem happy with that: as an electorate, they have been reluctant to hold politicians to account, so it’s hard to see why that would change.