Yesterday was the kind of day travellers do not plan and execute willingly. Weather forecasts in the northeastern USA were talking about ‘thundersnow’ (snow with thunderstorms), and ‘heavy accumulations’. It was just my pure genius that had let me book to return to Jamaica when that was the forecast. But, could I get out?

I took the road less travelled: I set off early, from a village north of Washington DC, where the deer were out early foraging in the garden for food. The news had reported schools and office closures. My logic: few would be on the roads, and I could take my time. I had a 1.30 flight, but I have no problem being 4 hours early. So, off I went. Well, almost. The snow had started falling about 4am, and by 7, when I was ready to go, the car was already covered. Scraping snow off a windshield is a task to be savoured. That done, I slid along the driveway to the main road and headed doth: the maps showed clear weather there.

I listened to the popular stations playing their music and giving regular updates. It was “messy” and “going to get worse”. Man, I needed to keep heading south. Honestly, the freeways were a breeze and only a few brave or stupid souls were on the roads. But, some just had to get silly and drive too fast on slick bridges; that’s how you end up facing the oncoming traffic and having your car wrecked: count two for that silliness.

I had to make a detour to pick up a package I had ordered. Well, driving into a neighbourhood never got so hazardous. The snow ploughs were working side by side to clear both lanes and I edged through the mess they created. I parked and got my box, then was back out within five minutes. Oh, I nearly forget: the driveway has a little mp at the top and that nearly messed up my plans and I had problems mounting it. So, onward!

I got the National Airport at about 9 and remembered to fill the rental car with gas. As is often the way with rentals, some simple things are not explained. How does the gas tank over work? After five minutes of prodding and pushing the flap, the thing popped open. Memo to car makers: just make all cars with a lever inside to release the gas tank cover. Topped up, I headed to return the car. As soon as I pulled in I heard “Mr Dennis? This way!” It’s always impressive when companies use information to make life simple. My one-way rental was over in 5 minutes and the attendant checked the gas tank was full and I had not left anything inside. Upward, again!

Let me tell you, taking two large suitcases a roll-on and a backpack along the moving walkway is tricky, and it’s a very long walk at National. Ten minutes later, and I reach a check-in counter. That was good news. My flight was not one of those flagged ‘cancelled’. I checked in and was told to just wait to board, at 1.30pm. Hungry, I headed for breakfast and just a chance to chill. Everyone was glued to the TV screen to see what updates were coming in. Oh, we didn’t need to hear about the Delta plane skidding off the runway at La Guardia.

People were in good mood, mainly because they had flights. The airport was eerily empty as most flights were cancelled, especially if headed northeast.  The time passed.

When time came to board, the crew on my plane worked miracles. Apparently, the airport was going to close soon after our scheduled departure, but we needed to get the plane loaded and de-iced. “C’mon people! Help us here. Step inside and let people passes. We don’t want to cancel the flight.” Some just don’t get it, though, and many people (not just old ladies wanted to discuss the minutiae of how their bag should sit in the overhead racks). Just sit down! “We have 5 more minutes if we are to do this, people. Five!” The attendant, sounding shrill, was doing his best. The pilot came on: “Looks like they’re going to de-ice us right here, so I will just pull back a little once we’re loaded. Don’t worry: the high-powered jet won’t come into the cabin.” The attendant came on again. “Everyone, we have just three minutes and people are still coming in…”  But, it got done and the door was closed. “The last bags are just on. We can close the door and pull back.” Whooosh! The lady next to me backed away from the window, as the fluids coated the wings. 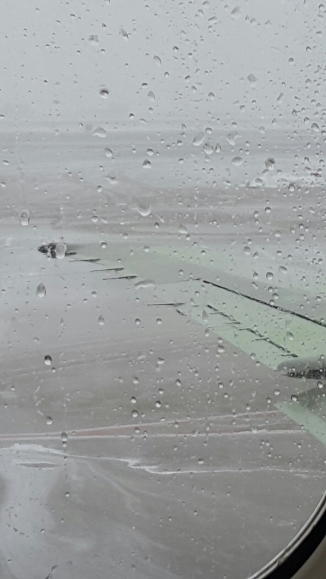 A wave of relaxation came over the plane as it seemed that we would take off. I looked out at the mounting snow. I’d never taken off in conditions as bad as this. I prayed. 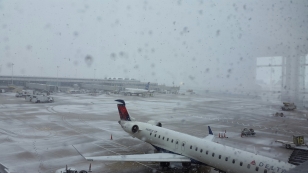 We took off easily and the flight was smooth. We were 30 minutes late and I had a 50 minute window to connect to my flight. We made good time and landed in Atlanta just five minutes late. Then…”Sorry, folks. After all that, our gate isn’t open.” I gasped. We sat for 15 minutes waiting, then edged forwards. People stood up and started to bring down bags…and 10 minutes later, we were still not moving. It took 30 minutes from landing before I was out of the door. Twenty minutes to get from domestic to international and find my gate. “Walk to the centre and hop on a train,” the attendant told me, and off I went. It was a lonnnnngggg walk. I got to the train at 4.10. This was getting close. We needed to make three stops. OK. Close the doors, please. Two minutes later, the door closed. At each of the next two stops, we waited two more minutes. I reached my stop and say signs for the gates, and escalators, and I headed for them. I started to run; no fun in heavy winter gear. I say gate 18 way off in the distance. I ran again. 4.19. I reached. People were milling around. The plane was there. Fortunately, it had come in late so boarding was not yet started. Thank you, Jesus! I caught my breath. “You’re here now, bro. Relax, dude.” I looked the older black man who spoke, and smiled.

We took off 35 minutes late, but I couldn’t care. We were headed to Jamaica.

During the flight, I asked one of the female attendants why they smiled so much. “It easy when the passengers smile.” Clearly, all of that hustle and bustle hadn’t broken my or others’ spirit. I sat back and enjoyed my inflight ‘meal’ of Starbucks and a bag of peanuts, cookie, or pretzels.

I got back to Paradise and my Jamaican hosts sent me a picture of what was now outside. I can’t say I felt bad about leaving. 🙂 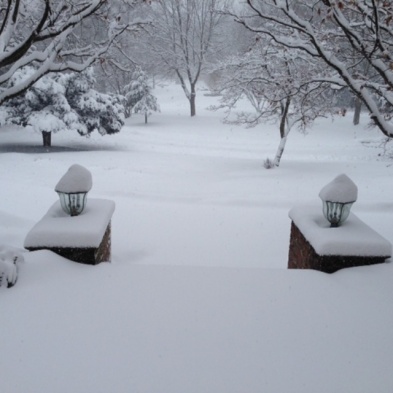 The joys of air travel!