I woke early this morning, and decided to stay up to watch Australian Open tennis. This time of year is tough for me as I prefer to cold, harsh reality of live sporting action to replays. Fortunately, this tournament gets a full 12 hours of live coverage. My favourite player, Roger Federer was dumped out by Andrei Seppi, and I saw the closing moments of that match. So, Roger won’t go past the 3rd round of a hard court major for the first time in a dozen years. Tennis is intriguing. It does reward consistent good play, but gives more credit for playing well on key points. So, for his pains, Federer won more points than Seppi but not the most important ones. That holds an important life lesson.

As I combed through the morning papers, my eyes blinked. I read that education minister, Reverend Ronald Thwaites, was telling our youth how lucky they are to be Jamaican.

Hooray! But, hold on. He’s reported as citing such benefits as not being abducted (as in Nigeria), not being forced into military service, and not going subject to pressure because of “religious convictions or lack thereof”. He added availability of education.

Now, believe me when I say I write on the fly: I do not have a fully fleshed idea when I start, but build the picture as I write. So, imagine that my surprise reaction finds good reason just by looking through the same paper.

On the comments page, sociologist Peter Espeut has a piece on ‘land of inequality‘. His focus may be on the unequal landscape for politicians, and those who have, he’s looking at the same country as Rev. Thwaites. Isn’t he?

I then see a letter about retention of mandatory devotions in schools. Mandatory? Rev. Ronnie, how free from pressure is the religious environment if you have something religious mandated in school? Maybe, dictionaries have new definitions.

I then looked in the Financial Gleaner. Dr. Aubyn Hill is lamenting our recurrent water supply woes.

That reminded me that our available education is full of schools with pit latrines. It’s replete with schools that don’t have water. We just had Digicel solve that water problem for a Portland school. The same Jamaica as hailed by Rev. Ronnie?

The Cabinet Minister is playing tennis with us. He’s seeking to win only certain points. Better bash back a few volleys and backhand slices.

I love Jamaica. But, I’m not lapping up the version of why offered by the minister-minister. I thought to the many horrific stories I keep reading about children been abducted and found dead, in woods, rivers, backs of alleys, etc. Let’s not kid ourselves about what it means to be a kid in Jamaica!

As for military service, some believe that a solution like that is needed to deal with the many social problems identified in the young population. We have nearly 40 percent youth unemployment, and live in a land knowing that idle hands are waiting for a devil to direct them.

Oh, my. David Smith just got released from prison in the Turks and Caicos Islands. What was that I just heard about Jamaican lotto scammers about to stand trial in the US? That group shows the often envied inventiveness of Jamaicans, even impersonating FBI agents. What was Guardsman, JPS and NWC warning us about people pretending to be employees and robbing people?

I was having my mind boggled this week by the sad story of Lloyd Bogle, who went to England as a boy and never visited here again, till last year. He has lived in England over 50 years, and thought he had rights of residence, and thus rights to leave and return. Wrong! He’d never become a British citizen. He made the matter tougher for himself by not applying for a British passport, but a Jamaican one; puzzling, if he believed he was British. So, to get back to England he needed a visa. When he realized that, in Jamaica, and applied to the British High Commission, it was refused. His real problem was that he was wholly ignorant of what he needed to do for easy travel between countries. It can be a minefield , unless your national passport lets you pass most if not all ports. Many people think a passport is like a ticket, and gives you access, but don’t realize that it’s one of several necessary things for international travel. The news furore over Mr. Bogle has prompted several agencies to try to assist him. While he waits, he has some good news. He’s a Jamaican in Jamaica. For that he should be thankful. I understand Mr. Bogle’s possible confusion. His move to England mirrors mine. But, I reregistered my Britishness. I also understood the processes. He does not, judging by the muddled way he’s gone about his travel and untravelling. Im judging by his interview on ‘Beyond the Headines’, where he didn’t know to whom he’d spoken at high commissions or ministry of foreign affairs, and thought that a receptionist could advance his issue. 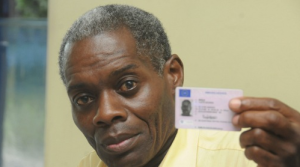 Lloyd Bogle did not understand what citizenship means.

Naive? Yes. Ignorant? Very. Do I want to cite him as typical of how being Jamaican is not a universal blessing? Maybe. But, we have Miss Jamaica competing for Miss Universe. We send our of our most beautiful to stand proudly with other beauties in the world. It’s good that she’s one of us.

We have the sad figures of our failed under-20 footballers (also lammed in the day’s paper). They’re great examples of how it’s not good to be Jamaican, because you have to deal with inept management, confused preparation, and waste of talent.

Sometimes when tennis players serve they bounce the ball a lot before tossing it up and swinging the racket. I think our minister needed to bounce his balls a few more times before he launched out.