What I’ve learned over Advent is that the reason for the seasonal outpouring of goodwill by Christians or children who see adults as open pits of money is about exploitation. Often, when priests know during Midnight Mass on Christmas Eve that they should be letting people get back to bed quickly rather than rollicking on, it’s because they’ve been reminded of this fact. Most vicars are men and susceptible to male weaknesses. I’ve watched them keenly and during services they often cannot help kopping an eyeful of the lady in pew A and that dress. The one with the neckline so plunging it must end by her navel. Get behind me, Satan! He verbalises his guilt and projects it onto his congregation. Job done. He’s exploited them and can get on with his impure thoughts.

But, I also see that like Halloween is about ghouls, Advent is about fools. Where’s the proof?

Fox, a TV network set on justifying it’s name, fakes the words “Kill the cops” into a video tape. Oops! Imagine anyone who was present noticing. Well, they did. What the fox was going on with the studio? Easy. They were all abused as children and had no idea that Crack was not what was in Rice Krispies.

But, more. Rush Limbaugh, whose name seems fitting for a horse, never feels afraid to trot out his views when it would be better to leave that horse in its stable. He just couldn’t let Sony executives get away with the idea of a black actor, Idris Alba, playing ‘James Bond’. Rush – to – judgement said it can’t be so because Bond was white. What the Fox! Bond is fictional. Alba is an actor. It’s a role. How do all those females get pass Limb urge and play the role of the boy Peter Pan. I never, never heard a peep on that. What about Dustin Hoffman playing a woman? Shouldn’t he have had an extra woman play those parts? Or Robin Williams as Mrs. Doubtfire. Tony Curtis liked it hot as a woman. What a bunch of Fox! It’s too easy to see Rusty Limpurge as a racist. Why? It’s white in front of your eyes!

Alba would be in the school of crossover actors. Didn’t that great English actor, what’s his name, black up and play ‘Othello’? 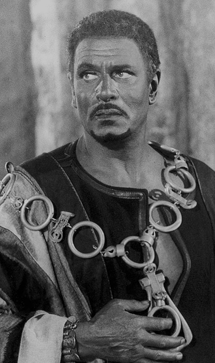 Paul Schofield, white on the inside

Would we be happy if a white actor play President Obama? No! He should be played by a Chinese-Cuban transgender actress/actor, who’s won the audition after being pulled from the welfare rolls. That would be fitting.

The Chinese want to outlaw puns 😨 They also want to ban Christmas! For C****t’s sake! Hold a meds!

Dont let the fools and exploiters steal the baby Jesus and spoil all the fun.

From high and low places, people want to take advantage of our good nature as this time. Tell them to stop it.