For some parts of the Jamaican media, it’s always the silly season or slow news day. IT’s nearing Christmas, so most journalists are having to take time off to get the presents bought, so thinking about good things to write and grip the public’s imagination may not be where the mind is at.

Jamaica has a former Miss World as a Cabinet Minister. For those who do not know about these things, that means she was a beauty queen, or B.E.A.U.T.Y Q.U.E.E.N. Get it? She is beautiful and the world rewarded her for that. Clear? Fast forward…

She became a politician. Stay with me. She was still beautiful. OK?

She lives on the island of Jamaica, which is a tropical paradise with lots of nice sandy beaches and hot sun. OK? People in such places go to the beach to relax. That’s taking a little time off without text messaging. Normally, they take off their work clothes so that the sand and salt don’t mess up the fibres and the Brioni suit or the Lisa Wang dress. It is normal. OK? Alright? So, Jamaica, chill.

Lisa Hanna being extraordinary in her normality

But, context again. Jamaica is a country where schoolgirls’ knees are locked away from sight. They can only be bared to the looking-on-with-prurient-gaze public once the children have graduated from high school. You get an idea from the picture of a school trip (though one rebel child was just about to be sent into detention).

Well, Jamaica, I have news for you. The world does not give a tinker’s cuss. Not a jot. Not a winkle. Take a leaf out of the book of the best at the baring it all for the people.

Close your eyes before you look at this picture

I give you Vladimir Putin, Russia’s president, who must take the cake for being the most exposed modern politician. He’s made it part of his signature image to show off his macho image, and often a buffo, or nearly so. (One of his problems afterwards was that he became the poster child of gay men’s magazines. O.K. Awkward.)

Putin, half naked on his horse

But, he’s just one of many European politicians who seems to have no problem showing a bit of skin.

However, if ever a power couple existed, it was/is the Clintons–one past president and, maybe, soon, another president in the couple. Look how they profiled their swim suit edition. Was this some early form of torture? 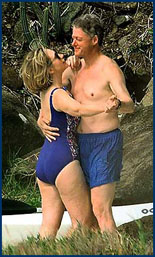 The Clintons, as close as can be. Who needs briefs?

Clearly, the land of the free is also home of the bathe. The Man in the White House is not afraid to stir up a little controversy. So, of course, while he was on vacation, he did what normal people do: he stripped off and put on his beachwear. Say what?! CIA and FBI drones were hovering as wildly excited females got wind of this. Where was Michele to give him the side eye about showing off so much presidential torso? His nickname when younger was ‘Barry’. I wonder if it was really ‘Bear it’. Go, Barack! 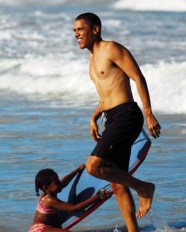 The beach thing (or is it thong?)

The satirical side of me, wonders if the world that is Jamaica would be happier if its Cabinet ministers stayed out of sight and better still remained as Cabinet members should, shut themselves up in the closet. Imagine a country run by people who are ordinary Jamaicans. Where has that phrase come from? Stop it!

The Huffington Post did a feature a few years ago about presidents and first ladies in swim suits. I warn you now, it’s not all pretty. We are well behind.

All of that is small potatoes compared to the exploits of a woman politician from Oh, Canada, MP Belinda Stronach. I will let the pictures tell their 1000 words. Maple leaf? How about a fig leaf?

This MP has a penchant for dating ice hockey players and proudly says she doesn’t sit at home and knot of Fridays. TMI!

I suspect that, as usual, a little sexist double-think is at work in the angst some show about our Minister. I look back to images of German Chancellor, Angela Merkel, never shy to grab a flagon of beer and down it in one. Do the public, or some of them, have a single image of female politicians? What good for the goose (male) is sauce for the gander (female)?

Call me old-fashioned, I’m not really good with hypocrisy.

But, context is all.

Jamaica is all about women draping themselves over cars to make them more appealing to buyers…well, male buyers. Do the same for almost any product and the average Jamaican consumer is supposed to be lapping up the edifying images.

Jamaica is all about male Cabinet ministers captured doing a ‘daggering’ dance with a female supporter (sorry, for that choice of apt word). He was a skilled dance hall artiste, as some of his other moves show clearly. Roger that! 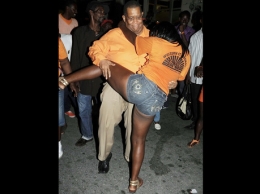 Roger Clarke, doing what he does…

We are comfortable with such images of unnatural party political expressions of support. Is that vote-bae-ing in an early form?

Is the Minister doing her job, and doing it well? Focus, people.

Is the Minister entitled to time off and can she use that as she pleases? I’ve seen pictures of her going to church. What next?!

The ice was everywhere and not a hair on the Minister’s head was out-of-place. Not a touch of make-up was smeared. Her smile was a radiant at 92 degrees as it was at 32.

You just cannot keep a nation happy. Or, is it that the detractors are all people of a different political stripe?

Whatever, it is, get over it.