Jamaicans are well-accustomed to proverbs, and many people live by them. I know that not everyone is consumed by the news that appears in the newspapers, on radio, or on television. But, I’m assuming that the reader has heard of the Outameni scandal…saga…debacle. Call it what you like. My mind runs to what it says about the Jamaican character, because so many things are all about what ‘seems natural’ to us, in this case, as a nation.

Jamaicans seem so used to hustling that it doesn’t seem possible to not do it in any walk of life. How else can we explain the sort of dealings that are going on over the aptly named ‘Outameni Experience’? Man a jus run a likkle ting!

Not everyone wants to ‘run a thing ‘s the extent of being a hardened criminal, like Rhygin, but many are ready to ‘run a thing’ to make sure that they don’t get left out of di runnins wha gwan. Snooze you lose. So, we have electricity theft, theft from JUTC, theft from NWC…and a little bit of thievery from the people. How else can one explain the idea bandied around by some on the NHT board that buying a property under is assessed value signifies a profit to be made? “Man, yu nuh si di deal mi get?” Only one genius in the world could see the riches that would come from spending J$18 million an acre for land that is worth much less than that?

The great thing about having young children when you are well advanced in years is that you can tell that you’ve seen it all before, and they will likely believe you. So, to the NHT board, I say, I have had my plonker pulled many times before and I know how it feels. 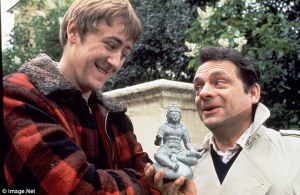 Del Boy had his plonker pulled many times. Look at his smile.

Anyway, sort of getting back to my initial theme. The Outameni debacle is in danger of being an out-of-body experience. It’s turning into a proverbial nightmare for an increasing number of people. But, here’s where the Jamaican experience can help. We have a proverb–in fact, often more than one–for everything. So, let me suggest a few choice ones for those who are embroiled in this growing fiasco.

We run t’ings, t’ings noh run we. Translated: Control your own destiny. Except, some people will be run out of jobs and maybe out-of-town. So, control of one’s destiny cannot be assured in the murky world of politics.

A noh siame diay leaf drop a river bottom it rotten. Translated:Time is the master. One will wait a long time to catch up with someone who offends him or her. The time is nigh….Muwhaha…

Noh cup noh brok, noh coffee noh trow weh. Translated: If you survive unharmed, everything is fine. The emphasis here is on ‘survival’. Judging by the rapid exodus from the NHT board, the fittest may already have left, not be amongst those clinging on for dear (get it?) life.

When the PM speaks tomorrow, all of this may come flooding back.