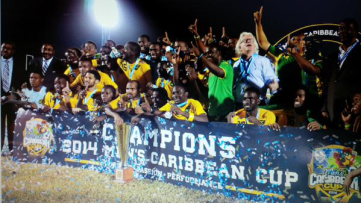 Reggae Boyz, victorious in the Caribbean Cup, and the coach is happy

They did it. The Jamaican men’s national team, aka the Reggae Boyz, won the Caribbean Cup last night. The flat facts are that the game ended 0-0 are normal time, and no goals were scored in extra time, so the match went to a penalty shoot out. Jamaica started well, scoring its first two penalties. Trinidad missed its first. All looked set till Jamaica missed its third kick, putting some drama into proceedings. But, Trinidad (FIFA rank 49) did not seem as comfortable, and when their kicker skied their fifth shot, the cup was Jamaica’s by a 4-3 margin.

Pandemonium followed as the relatively small crowd got the win they had hoped for. The coach, Winfred Schäfer was a little overcome with emotion immediately after the match, but had breath enough to utter that the team benefited from its preparation.

The simple profundity of that point may be lost on some. But, I am one of those who have wondered why the national team had been on a path set to fail rather than succeed, with a series of friendly matches notable for the lack of time to prepare. Off to Europe, long flights, tight schedule…results showed that very good teams have little sympathy with mediocre teams who are not up for the game. The result that stood out was the 8-0 drubbing by France (FIFA rank 7). I don’t know if Jamaicans were really shocked rather than embarrassed.

More recently, the team schlepped off to Japan (FIFA rank 52), and reportedly had half an hour to practice before the match. The ‘narrow’ 1-0 loss is not the thing to focus on, but the fact that having taken two days to reach a destination then try to play a high-level match is the action of the suicidal. Jet lag. Climate difference. Cultural difference. Away match nerves. Name many other things that were working against a team. Then, to practice as long as most people spend on dinner is a travesty.

If I were a serious Jamaican, I would have called for the head of someone, and I did in an indirect way. But, this is the fault of the Jamaican Football Federation, which needs money so badly it cannot put its players into a national training camp and find opposition to play at home or nearer than in Asia, and present the country with stale excuses about why the team is losing.

Jamaica’s FIFA ranking slumped badly as a result of the farcical venture and the string of losses, and sat at 113 coming into the Cup competition. To me, that alone should have been a humiliating outcome of a period of ‘rebuilding’. The nonsense was best summarised by the fact that they were ranked lower than Antigua and Barbuda (#70).

Many people looked at the ranking without understanding that the placement matters. Players cannot get into the major European leagues if their national teams are ranked outside the top 75, so Jamaica’s development could be hurt by that unnecessary slip.

The country has an abundance of talented players. We are not spoiled by the riches that Louis van Gaal has to manage at Manchester United–are any of his subs Jamaicans? But, we have a small crop of players capable of holding their own in the premier divisions around Europe. We could have more and that should be the aim. The current coach understands that locally-based players cannot compete well enough against seasoned internationals in much better teams, who are almost all playing in the top leagues in Europe or Latin America. National pride is not really hurt because the team has only 4 locals in the squad. Antigua– a tiny nation–has realised this, and had only two (if memory is right).

Much of the discussion about football that goes on locally is not about the national team: it’s about schoolboy football. That really sums up one of the major dilemmas. Local football at the professional level is not that good. That has to change. We would be laughed out of the room if we went around touting how well Jamaica College had been doing in the Mannings Cup and wondering if STETHS would again haul in the Dacosta Cup, and who were the real close rivals. Truth is, though, that professional football is at least the second class citizen in that conversation. Few have resources as good as the schools on which to play.

Talk has moved, recently, towards how the local professional game can be developed and the many ideas all have some merit. Will any of it materialise? Well, the chances are improved by a better performance this past week. Backers like winners. It’s a better platform on which they can build.

Let’s hope that Coach Schäfer can get enough time with his players to run good camps before each set of fixtures. The Captain (Horace Burrell) should know that to bake well, the ingredients need to given time to rise before they are put into the heat of the oven.