I was shocked how little time it took for me to shed Jamaican characteristics and adopt English ones. My daughter and I had checked in for our flight to London, and been given access to the airport lounge. Once there, we began hearing those well-known English tones and expressions. “It ain’ long till ve flite, Jo’n…”…”I kno’, I kno’…” I was looking forward to a few days in France and passing through London first and later was going to be interesting. Once we got onto the plane, England came out to the full. A team of rugby players was boarding and I was glad that we did not have to compete for space with their burly bodies. The British Airways crew was as pleasant as I recall. Within minutes, we were offered some cold drinks. I used to enjoy the luxury of champagne or wine when I did this sort of travel for business. Now, that I am teetotal, I settle for water or tonic water. I looked longingly at the Bellinis that were on offer. “You awright, luv?” the attendant asked; my eyes might have looked misty.

We went through the process of loading the plane. “Where do they ‘ave ve seat numbers?” a young lady asked. I pointed above my seat. She was in 37 something, and I pointed her toward the back of the plane. A lady sitting across the aisle from me was in the wrong seat and had to move. She went about 6 rows back. What is the similarity between 11 and 17? I couldn’t fathom it. “Wanna cuppa tea, dear?” came another attentive question. I didn’t really, but was pleased to be asked and accepted. My daughter was fiddling with all the gadgetry in her seat and trying to make it turn into a bed. I just let the fatigue flow over me. I asked if I could start the film before takeoff and was told I could. I started watching ‘Saving Mr. Banks‘, about Walt Disney’s efforts to negotiate the rights for Mary Poppins. We were soon ready for take off, and had to pause the movie. I listened to the safety instructions. My ears were already adjusting from Patois to mainly London accents.

The flight was really uneventful. I had made similar so many times in my working life.

I had told my daughter that I usually fell asleep within minutes of take off, and the way I felt, that was likely again. She was not bothered. We got into our films as we enjoyed our in-flight snacks and then the dinner. “Oh, real plates, Daddy!” It was real food, too. I started chuckling a lot as I went on with the movie. I then went into full-scale laughter as I watched a second film, ‘A long way down‘, a black comedy about four would-be suicide attempts that coincide on a tower roof, and how they become friends. A wacky plot, but one that worked well.

Fatigue took over and I had to crash after that second film. I wanted my daughter to sleep too: it was a nine-hour flight, so plenty of sleep time was available. Most people had already put their heads down.

Refreshed, after a few hours sleep, we were heading into England. “You reddy fer brekfas’?” I was asked. I was. “We’ve got smoovies and fruit.” I asked about a full English breakfast. “You get dat on ‘e way back, but we ‘ave bacon sand’iches,” I heard. I could handle that. I told my daughter about places in London where you could go for a full breakfast in a market area, and have a few beers before heading off to work in The City. I used to love the Fox and Anchor’s offering. 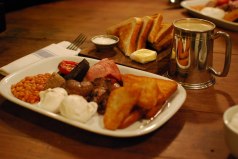 Wrap yourself around that at the Fox and Anchor!

I had already been given instructions by some Jamaicans who used to live in London that I should bring them back steak pies and eat fish and chips for them. I was looking forward to fulfilling my task. Or was it filling fully that I had to do?

Our tired bodies were glad to land and get out of the compressed atmosphere of the plane. We enjoyed the long walk to Immigration, to stretch our legs. We got through Immigration quickly and our bags arrived in no time. We needed to switch from Gatwick to Heathrow to continue to France. We negotiated the tickets and waited for the bus to arrive. We were surrounded by hordes of Spanish school children, and the sense of Europe was very present.

Our bus came and we had our bags loaded and took some of the front seats. My daughter wanted to get a full view of the ride. We both loved the rolling hills of the Surrey countryside, as we headed along the motorway (M23) near Gatwick. “I wish I could live in a farmhouse like that,” came a request. “May we live in England after Jamaica?” came the follow-up request. I love the English countryside and explained how many places have planted wild flowers near roadways to encourage bees and butterflies. I got no reply as my buddy had fallen asleep again. We rolled off the bus at Heathrow, and rechecked our luggage, and headed through security again. We could use ‘Fast Track’ and it was hi-tech: scan the boarding pass to get access, scan it again before loading the belt: ‘Thank you’ and a big smile appeared on the machine. My daughter wanted to scan again for another smile. We loaded the belt. One checker, wearing a turban, asked me about my two bottles of rum that I had bought in Kingston. “Vey carn go as ‘and luggig!” We then had a short discussion with his supervisor. Bottom line was that I needed to put the bottles into a bag and have it checked. Another checker escorted me back to check-in and my bag and ‘fragile’ contents were taken. (It seems that Jamaica has not complied with new rules on how liquids bought in duty-free should be packed for travel.) Crisis averted.

We were ready for a long lay over before heading on to France. My daughter saw a lady offering samples of Cadbury’s chocolates and we had to have some. I asked the lady if she remembered how suggested the Flake adverts had been. She did.  We left it there.

So, here we are. In Europe. My daughter loves the grey, cool weather: “I wont sweat here!” The sky is cloudy and it’s windy.  It’s almost summer, after all.

Europeans and Caribbean people are about as far apart as any two groups. You can tell how people think by what gets reported and how in the newspapers. Suffice to say that the front page of The Times has news about an embattled government minister, a picture of Prince George and his mother, and the Chinese PM’s mission to London to show Britain the ‘real China’. The back page is all about England’s World Cup match against Uruguay. Strangely, no stories about ‘gay thugs’ or supposed shortage of IV fluids.