I don’t want to give the impression that I do not care what happens to the Jamaican dollar exchange rate; nothing could be further from the truth. I just see things from a particular perspective: I am an economist and I used to trade foreign exchange. One of the first lessons I was given about foreign exchange markets as a trader was that traders are not good at picking tops or bottoms to trends. Also, markets tend to latch onto the prevailing direction more easily than go against it. Think also about metaphors concerning catching a falling knife.

I am not surprised that more comments appear to be coming about the current level and direction of the J$. Anyone living through a 20 percent decline in the value of their currency during the short period of two years or less should be worried. It’s like living in a period of rapid inflation: the loss in value of the money you hold is almost visible. In some sense, the exchange rate slide is just that, of course. Our prices have risen too fast relative to most of the countries with which we trade; or our costs have not been as well contained as theirs. Our competitiveness has declined. The exchange rate is a price, and it regulates the prices in our country in comparison to those overseas. If we fall out of line with our relative prices/cost, the exchange rate should move to keep the prices/costs the same for foreigners.

Several government politicians have noted recently that the exchange rate is an outcome that reflects fundamental conditions in the Jamaican economy. I would not disagree with that: at its base, that should be the case. But, fundamentals do not affect the exchange rate in any clear and simple way. More worrying, improving fundamentals need not show up in an improving exchange rate either quickly or fully. In that sense, markets are capricious. They also take account–sometimes, too much–of sentiment (call that confidence, or lack of it, in the policy makers). If markets do not believe that policies are credible, they tend to hammer an exchange rate. Despite the success in sticking to the current IMF programme, the government has not seen that translated into improved business and consumer confidence. Such confidence is rising in Jamaica, but still remains very low, according to the last set of data, for the first quarter of 2014. Despite the increases for almost all areas, confidence levels are “nowhere near the highs” of previous periods and are coming from two quarters of extremely low levels, Don Anderson, managing director of Market Research Services was reported to have said.

But, people are often afraid when they see no end to things they dislike, and the exchange rate is no different. Well, it is different because people often put a lot of national pride in the level of their currency, and feel it personally when the currency seems to be weak. That’s no different for countries with large, strong economies, compared to those that are small or weak. Many of neighbouring countries are quick to see the Jamaican dollar rate as a clear indication of how far down the hole this country has fallen. Those with fixed exchange rates, such as The Bahamas and Barbados, often do not relish any notion of having a floating exchange rate, given the kind of slide that has happened with Jamaica’s currency. They also do not fully appreciate that they are living a lie–their economies have not stood still relative to the USA since the day the rates were fixed, so their currencies should have fallen too, more so, because they have not made policy changes to offset the differences that have occurred. They are paying for that in other ways–unemployment, for example. They also still need to deal with some of their core problems, such as the level of their budget deficits and a ballooning debt burden.

I don’t envy the Bank of Jamaica’s governor or our minister of finance. They are in a hard place sitting under a falling rock. The country does not have the means to ‘defend’ the exchange rate. 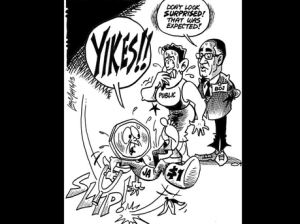 Slipping into darkness? (Courtesy of The Gleaner.)

Our net international reserves–the amount of foreign exchange available to finance imports–sit at about 14 weeks of imports (that’s close to an internationally accepted satisfactory level of about 3 months of imports), see a recent press report on that level, though for concern that they are slipping. I would rather see that stock used to help buy what the country needs, rather than trying to hold a price that may not be right. I suspect the government agrees. So, the ‘slide’ wont stop because the government throws foreign exchange at it.

Some press reports caught yesterday that the Inter-American Development Bank commented that the slide in the currency was affecting adversely business and consumers in the short-term. Well, sorry, that is part of the expected effect. Importers and consumers of imports are not supposed to feel good when the exchange rate falls; they are meant to consider changing their behaviour because the national demand for foreign goods is too high. Now, the current structure of Jamaican businesses and Jamaican consumer tastes may have a strong liking or need for imports, but that’s what has to shift. Of course, it cannot happen instantaneously. The businesses need to figure out if their inputs need the foreign content. The consumers have to consider if their tastes for foreign things cannot go down. I’m not into the drama scene of hand on brow. I read a tweet yesterday about no radishes and cilantro in the supermarket. Well, find another local salad vegetable and get growing with substitutes like mint leaves in the near-term, or if we really cannot live without those items, start growing them. But, then we get back to how well can we do that at prices that make us competitive. It’s not enough that our ground is fertile, but at what cost do we get the stuff out of the ground or off the trees?

I am not going to scream as the dollar declines. We have been very good at laughing and joking for decades about what needed to be fixed in Jamaica’s economy. Governments have lied about the state of affairs, and people have lapped up the lies like a cat with a bowl of milk, because it was much easier to do that. Change is a great source of fear. But, often when you don’t change voluntarily when you should have, then the forced change is often more drastic than it would have been and more sudden. We are going through that phase. It’s really painful, like tight shoes are, or even tight briefs, if you are a man. But, like with those sartorial problem, you can either wince and not get into something more comfortable, or make the adjustments to walk comfortably.

Government hasn’t quite got it right in making people see that they need to make those adjustments, I think.