I spent the weekend in Montego Bay with a bunch of golfers, playing in the LIME Cup team competition. My preparation on Saturday was good: I played a round with a man from my club in Kingston, but who’s on another team, and we were team mates last year. We had a close match and enjoyed the way the course tested out meagre abilities–we’re about 21 handicappers. We played some really good shots (mine was a mammoth drive on a par 5), got our share of members’ bounces (mine was off a road, down a track and roll in the middle of the fairway), had our bad breaks (landing in water-filled bunkers), and had the putts that wouldn’t drop. We laughed a lot, and were good hosts for the two American tourists who’d been paired with us. They had arrived the day before and were in Jamaica for a friend’s wedding.

We got down to playing the team matches on Sunday morning. Breakfast was on offer–Jamaican-standard fare of ackee and salt fish. Players warmed up and teams got pairs ready. I was due to drive around with our team captain; I had a very sore knee after standing on pool deck so long on Friday, and aggravated by playing golf on Saturday. I was fine. We watched mainly our ladies team, who were in a tight match–they lost, but not for want of support. 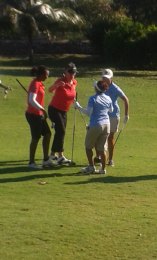 We had a slow day, because the start had been backed up, and the loss of rhythm never helps. But, we got to noon and the break for lunch, just as rain was coming down hard. Everyone took a good long rest, ahead of the second round in the afternoon. The rain lashed down.

Play resumed late, and was over within half an hour and rain came teeming down again. The sponsors took advantage of the players and Appleton let the rum flow, while players started or continued stories of golf games maybe played in reality, but perhaps only in the mind. The noise was high. Many saw that the rain would not let up and started to make tracks to head home; Kingston was the main destination. I managed to hitch a ride with a doctor, who’s also a member of the club where I play.

We got into a set of conversations. First, we talked about the Hilton Hotel and Cinnamon Hill golf course, which do not seem to work together. I understand that the hotel does not own the golf course, but abuts its land. Tourists are always walking around the course, or watching play from hotel windows or perched on one of the mounds by the signature hole, number 5, that runs down to the sea. But, my experience had been that the hotel seemed to know or care little about the golf. Why? This is a perfect tourism marriage. At least, the foreigners should be tapped to throw their money into our economy.

We talked about how golf was not being sold well in Jamaica. At the least the seasoned players could be catered for better. But, the new waves of young people was there, who could benefit from exposure to the sport. True, we do not have the luxury of municipal courses (and our national economic problems would not make this a priority), as in many other countries, but options were there. 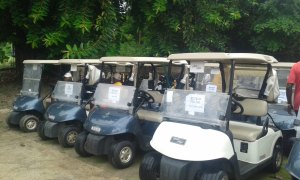 Golf carts are among the heavy investment needed in the sport, and needs paying customers

But, we are letting youth development opportunities slip away–not for the first time. We seemed to not want to build on what ought to be good pairings, of courses and hotels or resorts, especially in the main tourism areas, but also in the Kingston area, where this could be an adjunct to business travel.

Was it a hangover from a socialist-thinking administration? Was it just not seeing that every asset should be made to work for the national good? As we drove along, we talked about the good features of golf and saw some of its sad parts.

We rolled our thoughts towards the courses elsewhere in the island. I mentioned that I had been struck by the lack of development of golf in Jamaica, and had drafted some thoughts and ideas about how to deal with that. We discussed where  I could perhaps send the paper.

Golf is a sport that needs a lot of money to support it, but we believed that it was there, if it were sought properly.

Our minds went back to the unfinished golf tournament. How would that be resolved? No matches had managed 9 holes, and the competition rules provided for that, if caused by ‘act of nature’, by awarding each team a half in each match. That would be fair and clear. However, it seemed that the great minds that are the captains of the team had met and decided that this rule would not apply. (I may be wrong about this, but let’s go with it as if it’s correct.) They decided to try to play the unfinished matches. The schedule was for the last set of round-robin matches to be played on June 1, in the morning, and the deciding matches for first to sixth place would be played in the afternoon. Now, the plan was to replay the matches washed out today, on May 31, and then go into the final day as scheduled on June 1. However, the newly arranged Satruday matches would be played at a course in Kingston, and players would head to Ocho Rios, as scheduled for the Sunday.

We thought that was not a very good solution. First, the rules took away the need to replay the washed-out matches. However, the sharing of points does not help everybody. Here comes human nature. Funnily, the teams who had been sitting in 1st and 2nd place at the start of Sunday, had been playing each other when the rain came again. A halving of that match would suit them both: the 1st place team, would almost guaranteed a place in the final, and the 2nd place team probably could not have done better than halve the match; so they would get more points than might have been the case. Two of the other four teams, however, stood to gain a lot if they could win their matches, so replaying would be in their interest. For two, it would raise their chances of finishing second; for two, it would perhaps boost them from the basement. Guess what? The voting for the ‘rule change’ reflected that set of calculations: the 1-2 teams voted to stick with the rule; the others voted to replay. Deal done.

My doctor driver was flabbergasted as he talked to another golfer as we drove. I said that the outcome was exactly what we should have expected, once the rule was not being applied. He held his head. We had been talking about how politicians can manipulate, and here we were watching people act like politicians. It would even have been better in our minds, if the round-robin matches were finished on the Saturday, and leave the Sunday for the finals, and more time for socialising, but also an earlier finish, which would suit many, but also allow for another weather delay. But, we had not been at the meeting.

It’s a sad truth, that once you have humans involved, you need to never lose sight of what motivation will do to their decision-making. Economics tells us about ‘rational man’ (who is often self-centred), and how he will try to maximise his benefits. Voila! It’s not just in the political arena that people are prepared to tear up things put in place by ‘our forefathers’ for good reasons, to protect the interests of many, and try to look after the interests of a few.

We reached the Spanish Town bypass, and turned our thoughts to how a new north-south highway would speed up journeys to the north coast. We looked over to the Grace Kennedy factory, with its massive tin of baked beans promoting the wares. We could see the observations tower of Tamarind Farm prison. A driver cut us off the road, as he and his passengers, without seat belts, careened along the highway. Connections. Disconnections.