When I heard the ‘spokesperson’ for some organization utter that he wanted Jamaica to move toward the first world, I shuddered. I remembered quickly a comment made to me a few days ago about how people here are lapsing increasingly into the language of clichés. Jamaica is not immune from the toxins that float through the world. In our sometimes misguided rush to seem like we have the chutzpah to at least talk our way up there with the best, I wish that we’d take just a deep breath before we go utterly headlong where we shouldn’t tread. 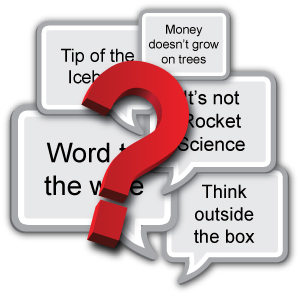 I have to read and listen more carefully in coming weeks, because I think I am missing gems flying around out there in terms of clichés clucked out of thin air. But, here are a few from the past week alone, just from casual listening.

“Back to the negotiating table“–(uttered in the context of a recent strike by oil tanker drivers)…except, in Jamaica, it may mean going TO have negotiations, after blustering and huffing in irate comments that have not real been discussions.

“Incentivize“– (during Parliamentary Committee on Banking). I did not hear the name of the person speaking, but it was a private sector representative of a bank. I’d be very happy to get much lower fees for all the electronic transactions that the banks are making it easier for me to do.

“It’s a game of two halves“–too many football coaches in Jamaica. The essence of the game is TWO halves (what are two QUARTERS?). Yes, I understand that it’s meant to highlight a contrast in how the match went, but it makes my teeth grate.

“It’s just a matter of going out and executing…”–Jamaica’s cricket team captain. Who will be in the cross hairs? Lest, he speak before the firing squad approaches…

“Stakeholders“–Too many people wanting to sound like bureaucrats. When I heard the president of schools association use it last night in a discussion about sex videos by teenagers, I wondered if he really thought this made his comments more substantial. The use of the term has gotten out of hand. I dread the day when my 10 year-old comes and refers to me and her mother as ‘stakeholders’ in her life.

“Democratization of information“–Dr. Karen Carpenter (clinical sexologist…not to be confused with psychologist), on Impact, discussion sex activity by teenagers. An academic has written that ‘There is more power than peril in democratization of information’. Maybe, but it’s a perilous phrase, and one whose misuse may well be just around the corner, once word gets out about these words.