So, it’s official. Andrew Holness was confirmed in his position as Leader of the Jamaica Labour Party (JLP) by a special delegates council yesterday, with 2704 delegates voting for him, against 2012 voting for contender, Audley Shaw. 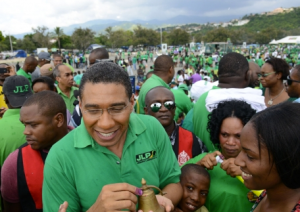 The contest for leadership is settled. Now, can the party settle itself?

The main contenders were all smiles and handshakes immediately after the results were announced. Mr. Shaw was quick to indicate “I am willing and ready to join with you, to build back the Jamaica Labour Party, to bring back love to the Jamaica Labour Party,”. He also promptly tendered his resignation as Opposition spokesman on finance, so that the leader could have a “free hand” and pick the team he wanted to go forward.

Although talk has moved quickly to the need for unity and healing within the JLP, after what was a bitter, if not bruising contest, it wont be that simple. Senior JLP MP Derrick Smith touched on what the JLP body had suffered: “wounds have been very, very deep” The campaign was full of accusations and counter claims–not really that unusual in politicis, and very normal in Jamaica. However, immediately after the election results, some of Mr. Holness’ supporters (e.g. Everald Warmington) had reportedly been quick yesterday to say the equivalent of “good riddance”, shooing them off the stage at the National Arena, once the results were known. Bringing the love back will not be as easy as sending Valentine’s cards. 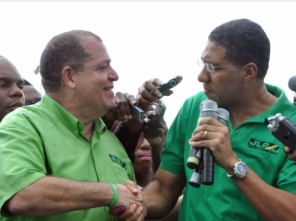 Mr. Shaw put a brave face on defeat and took to the high road, saying that this was a “great day for democracy in the Jamaica Labour Party.” Mr. Holness also wanted to signal that he thought civics were the winners, saying this was a “victory for democracy within the JLP and the grassroots people of the party.” The party’s democratic processes had been put to the test and appeared to have come through with some degree of success. But, that is only part of the whole battle.

The ultimate challenge is to beat PM Mrs. Portia Simpson-Miller and the People’s National Party (PNP)in the next general election. The PM has just been in Japan on an official visit and was reported to be regaling her hosts about the beating she’d put on Mr. Holness at the last election. That was an odd thing for a nation’s leader to do, but Mrs. PSM knows what sells at home and while the JLP were about to say “Hooray” to their new leader, she was reminding them that the Queen of Ray-Ray was alive, kicking and ready to mash whoever wanted to take her on.

It’s hard to believe that JLP’s unity can be willed by a few words and smiles, and like with real wounds a good amount of time will be needed to heal the rifts that were opened in the past few weeks. But, will they be given that time? Whatever the first order of business today to rebuild a team to take on the PNP in Parliament, the JLP should know that it has to be ready to take on PNP at the polls. 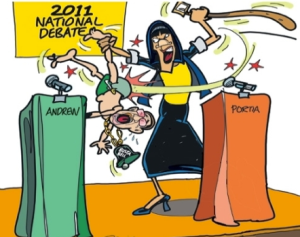