Up until 7pm last night I had merely heard about the US TV programme, The Voice. But, over several weeks, I’d gathered from social media that Jamaicans had a big interest in the series. Last night, I understood why. My little daughter was curled on a sofa with some cousins, all were chewing on their hands as keenly as they tackled the chicken bones. We were not at home and I needed to get her home. We dashed off before the the show got too far, so that she could bathe and get ready for bed. Then we waited…and waited…and waited. The sensation we were hoping for came out as the last contestant.

The profile of Jamaican singer, Tessanne Chin, was short but very touching, with nice shots of Jamaica and a link up with Sir Jimmy Cliff, with whom Tessanne had sung as a backing artist. He said some kind words. “Mr Cliff, thank you,” said Tessanne to the tablet screen, while Sir Jimmy posed with fez-like bonnet by a black grand piano.

Then, Tessanne started her number, covering Pink’s ‘Try’. Within moments, judges were hitting buttons, spinning chairs, and starting the mad rush to bid for her talent on their team.

Tessanne blew away the judges and the studio audience with her singing. Adam Levine won her over,perhaps with his professed love of reggae music.

She went stratospheric when she started talking afterwards, and gave the world another glimpse of the rich mixture that it is to be Jamaican. Many with close connections loved it when she talked about “bred an’ butta,” in that soft lilt that we know and love. We could have all whispered “Yea, man!”

Tessanne has set social media alight and Twitter trends may get rewritten soon; she was the number four trending topic soon after the NBC broadcast.

Let’s be like her father, Richard, and wish her well throughout the series and we’ll all be pushing hard for his “likkle baby”.

Jamaican icons have come in many shapes, sizes, and ethnic flavours. Remember, out of many, one people.

Jamaicans have shown much resilience over several decades. In local parlance, people have adopted a KMT (kiss my teeth) attitude. In other words, they show some disdain, and they’ve accepted that things will be just what they will be, and have just dug in for the long haul. Just getting on with it, would be another similar characterization. A gritted teeth determination has become part of daily life for many who live on the island.

The economy has not been a friend to all Jamaicans. Let’s take a quick look at farmers and fishers.

Those in agriculture and fishery have suffered while that sector has dealt with drought, floods, hurricanes, crop and animal diseases. Small fishermen deal with harsh conditions everyday, but have had to deal with competition from large vessels. Thefts has also plagued farmers, robbing them literally of their livelihood. Market conditions, with fluctuating prices, have also made life difficult. Capturing of land for housing has robbed agriculture of important sources of production. Financing has often been hard to obtain at affordable rates. Not surprisingly, many left the land, hoping to find easier conditions in towns.

Climatic changes have also started to have negative effects: excess rainfall, land erosion, reef destruction, have all taken their toll. Invasion of species have seen the loss of certain fish stocks.

The country has seen its international options suffer as agricultural preferential treatment dwindled. Our staples of sugar, bananas, rum, coffee, citrus have had a hard timing staying ahead of regional and wider international challenges. We’ve also been guilty of eating ourselves out of a living by importing foods at an astonishing rate. In the process, we’ve suppressed demand for many local foods. In economic finance terms, we’ve put ourselves in a horrible bind of needing too much foreign exchange to keep up with our food tastes, especially, importing meats and packaged goods.

Some of our leading processing companies, such as Grace Kennedy, have stayed close to the forefront in developing local foods in better packaged forms to meet local demand and also for export, and been daring in challenging huge markets abroad, including in west Africa and China.

But, legal farmers, mainly small, often little more than subsistence producers, have had a tough time.

Those who have taken chances to produce illegal goods, such as marijuana, have reportedly had good luck. Some legal farmers have added illegal produce to help them stay ahead. Some have even been bold enough to add tours of ganja farms to tourists. 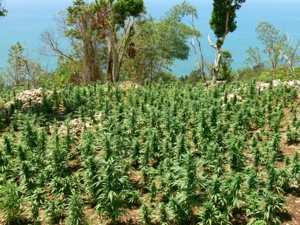 Farming is very much a mainstay of much of Jamaican life. Most people still like to eat local food and are accustomed to finding it available easily. They’re not concerned about the plight of farmers when they enjoy lower prices, such as presently the case with ripe bananas. The battle between the strong Jamaica Producers and the many small growers is helping consumers but may kill off many small cultivators. Higglers and vendors, who live by selling fruit and vegetables in many roadside places are threatened with removal from locations which become designated as ‘no vending zones’.

I heard a few stories about how chance made or killed agricultural ventures. Young family farmers, who had their calves sold and could never get the start they needed. A budding chicken farmer outwitted by natural predators, and losing 2/3 of her chicks: otherwise, unemployed and without many educational qualifications, she’s stuck without money to start again.

Many give up on farming or fishing. Many never start, hurrying to leave rural and coastal areas. Without many or any qualifications, their choices are few. Become new entrants to the ranks of higglers, but hawking non-agricultural goods? Become drivers or mechanics? Join the unemployed or underemployed. Both of these latter options put pressure on the rest of the economy. Homeless? Aimless?

Farming has rarely had an attractive image: early rising, long hours in the sun, the many challenges and failures that are the norm. Some have seen opportunities by finding niches: hill farmers who now try to be organic and focus on the healthiness of fresh fruit and vegetables. Farmers trying to link with major enterprises, such as hotels. Development of farm-to-table ventures, either through a restaurant or through direct sales to consumers. Focusing on flowers and herbs. These are small changes but none is worthless.

I’ve never heard any of my relatives, living or dead, speak of famine; I found a reference to famine in eastern parishes in 1907, after a severe drought. The thought of Jamaica without food seems ridiculous. Long may that last.

Agriculture and fishing are important first links in a long chain of employment. Forget about it or let it wither and the consequences could be ugly.