Insanity is often described as, doing the same thing over and over again and expecting different results. I’m not not going to get into a discussion about whether Albert Einstein really said it. Simply, I often wonder if that is the state that Jamaica has found for itself.

That would help us understand why road repairs are done so that when heavy rains come and wash over the thin surfacing that has been applied to the marl the repairs are soon undone and a road crew is again at work doing repairs.

It’s easy to believe that if any minimum standards are applied to this job, it’s using the minimum of materials and the minimum of sense. Smart and cynical people will quickly jump up and cry “Corruption!” “Kick backs!” “Jobs for dem friends!” and similar near-slanderous utterances. Some government minister will stand up and deny wrong doing and then oversee more doing the wrong thing. Keep it simple, stupid. The people’s money is being wasted!

There’s a lovely down hill stretch of road that has just had some holes repaired, and the surface glistened with new asphalt. Then down came a huge downpour this afternoon. You guessed it: the surface is coming off and the marl is peeping through. So, a mere week of smooth surface and saving on wheel and tyre repairs, and off we go again.

We’ve spawned new jobs from these practices. In many areas, people make a living from fixing potholes. Some do good filling in jobs. Some just place rocks that are too big in holes and dress them up with some green leaves, then stand on the road side with hands out for money, having warned you of the hazard and only moving the rocks if you pay. You can even get pothole repair kit. 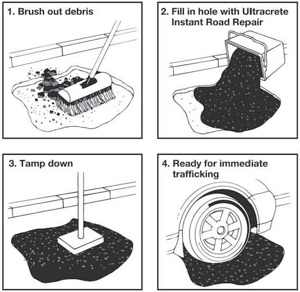 I love it that I see a stand near Barbican, where some guys have wheel rims stacked up almost as prettily as nearby fruit and vegetable stalls. Now, I don’t know where they got the rims–I always check that my wheels are still on my car before I drive off from some parking spot. This is a desperate economy. Anyway, I’m sure they get much business not from car style fashionistas, but from those who’ve just rammed another hole and mashed up the car’s front end.

It spawns anti-social behaviour. I dropped a class mate of my daughter’s home this afternoon. She lives in an upscale neighbourhood, which probably has the most potholes per square meter in uptown Kingston. On the way back from the drop off, I noticed the van in front of me heading off into some bushy open lot. I watched as the vehicle took a diagonal line to cut off the approaching corner and reenter the real road some 30 meters ahead. I followed the paved but pocked real road, then looked back to where the van had been. My daughter had piped up that the route it had taken was new. But, I saw otherwise: a clear and well-worn path. This was now the preferred route to avoid the potholes: drive through someone else’s land. I must say that I will be tempted to try the offroad thing next time I’m in that area. So, whoever owns that vacant lot, please don’t develop it yet.

Technology may be about to save us, at least in part. I see that there are pothole alert apps available. Some places also could use a ‘crowd sourcing’ program (http://www.citysourced.com/default.aspx) to be informed of places in need of repair. But, truth is, we know where the problems are. What we need are permanent or longer lasting fixes.

I really want to make the analogy with economic policies. Need I go further?