News media should always be on the look out for good metaphors. Today’s Gleaner ran a leader entitled ‘What policymakers might learn from athletics‘, and had a wonderful sentiment: ‘As a country in economic crisis and with deep social problems, Jamaica’s athletic power matters. It, in a sense, stands in vindication of our worth and as a metaphor for Jamaica’s possibilities.’

Let me try to take the baton handed by the Gleaner and run with the metaphor a little. I’m going to say that Jamaica needs to think of itself like Shelly-Ann Fraser Pryce, who won the women’s 100 metres final a few days ago in the Moscow World Championships, rather than Usain Bolt. The lady is nicknamed ‘Pocket Rocket’ for the power that seems to come from her small frame; as Jamaicans say, “Little but tallawah”–small but strong, not to be underestimated. That is more Jamaica’s stature than being Boltian, which suggests that we are faster, bigger and stronger than most. But, Jamaica is Boltian in its character 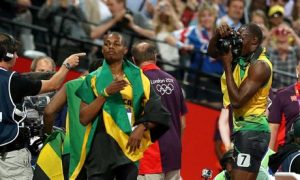 : tall, brash, light on its feet, engaging, maybe also a real ginal–the Anansi in all of us.

But, we need to watch out. Jamaica’s economy, or rather management of the Jamaican economy, is also like some of its best athletes–full of promise, yet faltering at key moments. I’ve met Asafa Powell and found him one of the nicest persons I ever met: physically almost perfect, yet gentle in that giant’s frame. I love what Asafa Powell has done for the status of Jamaican athletics–held the world record for 100 metres during 2005-8; he has more (nearly 100) legal sub-10 second times for that event than any athlete in the world. Despite his winning big international individual events (100m and 200m), such as during the IAAF World Athletics Finals, however, he has come up short when put to the biggest tests–Olympic Games and World Championships. But, not only did he ‘underperform’, he did it in ways that cast doubts on his psychological make up. In his own words (after losing to Tyson Gay in the 2007 World Championships–my emphases): “When Tyson came on and gave me a little bit of pressure I just panicked. When I saw I wasn’t in gold medal contention, I gave up in the middle of the race. I just stopped running.” He did not embody the name of his running club, MVP (Maximising Velocity and Power). Try and fail, but don’t give up! He has had injuries at crucial times. Finally, after not qualifying for the national team for the current World Championships, he has come under scrutiny after a failed drug test. He (and another, female, star athlete) did not follow MVP club protocols, and now the club coach has cast them aside, saying he’s “they are on their own“. Asafa represents the image of ‘not taking the chances that are given to you’.

Asafa runs the risk of people not believing that he will deliver his best. Some would say that is Jamaica, too, after a series of IMF programs and a stream of promises regarding economic policy actions.

The image of Asafa losing a major final or pulling up lame, or wilting when put under pressure, eyes downcast, stands large in front of me. Asafa makes us suffer!

Jamaica also reminds me of the 400 metres runner: after trying to sprint hard for most of the distance, lactic acid builds up and the muscles begin to feel like lead weights in the legs. The arms pump and legs try to push, but it feels like you are running in wet cement. The feeling is worse, if others in the race are not so badly affected, and pass you in a way that makes it seem that you are going backwards. Kirani James suffered that way, it seems, as he faded badly in the 400m final this week. Shock! In truth, the flagging runners could not maintain their form while others did not drop off so drastically. When you run this race, you feel sick to your core at the end of the race. Spent. Drained. Never again. Till the next time.

Eventually, the athletic body’s basic strength cannot give any more and, on bended knees, it stays motionless: the Jamaican economy, with its potential to do many great things, has been stagnant and underperforming, according to official statistics. Anecdotes and what the eyes see, however, do not support that picture fully. The body has moved better than seemed plausible. Have drugs been injested and are they flowing through its veins to enhance its performance? That’s literally and figuratively very likely. It has had its cocktails of old-style, over-the-counter ‘performance enhancing drugs’ (IMF loans, World Bank loans, Inter American Development Bank loans, Caribbean Development Bank loans, bilateral grants). It has had ‘acupuncture’ too (Chinese investments). It has tried mysterious ‘herbal remedies’

(supplied by many local ‘collie men’ and foreign dealers). It has rubbed itself with different oils (Ecuadorian, Mexican, Trinidadian, Venezuelan), all of them work a little, but still don’t give enough energy and flexibility; joints are still stiff. It’s tried some local solar treatments, but finds that it prefers to be bathed in oil. It’s performance could be improved if it made better use of the wind, but it often blows in the wrong direction. What to do?

An IMF team is due to arrive in Jamaica today to review economic data and government policy implementation under the latest arrangement. I found it quite ironic that yesterday it rained all day and into the night–a flash flood warning was issued. I couldn’t help but think of the comments attributed to Madame de Pompadour, official chief mistress of France’s Louis XV (15th), in the mid-1700s: ‘”Au reste, après nous, le déluge” (“Besides, after us, the deluge”). France had just come out 2nd in a devastating war, losing its American colonies to the British, its status diminished and virtually bankrupt.

Jamaica never had any empire, but it stood head and shoulders above other Caribbean countries and acted imperiously in 1961 when its people supported the idea of leaving the West Indies Federation. That led to the famous statement of Dr. Eric Williams, the then Premier of Trinidad and Tobago that, “One from ten leaves nought”. Jamaica then decided to stand up alone, for its independence from Britain, over 50 years ago, in 1962. Jamaica has since become bankrupt, in some senses, with its public debt now standing at an unsustainable level–150 percent to GDP–its status diminished.

But, once again, Jamaica has found herself qualified for a major event and a chance to get it right, to win the race that will vindicate its promise. She’s had lots of time to prepare and training went well. She has not reported any major injuries to hamper performance. The time on the warm-up track looks to have been well spent, and she is relaxed. The crowd waits patiently as she approaches the stadium and then heads to the blocks laid out for the start of the final race. She takes up position in the starting blocks. Eyes seem focused. Some sweat beads form on her brow, as anticipation builds and nerves start to jangle. She’s like Bolt, not known for her fast start, but knows that a good start is really important. Oh, if only she could be like Shelly-Ann, and blast out and be leading from the first stride. So, which performance will be we see? All hands are clasped in prayer, and voices can be heard whispering: “Don’t stumble out of the blocks. Don’t false start and end before the race begins. Hold your form till midway. Finish strongly through the tape.” The eyes of the people standing in Half Way Tree look up at the big screen. How will this race be run? 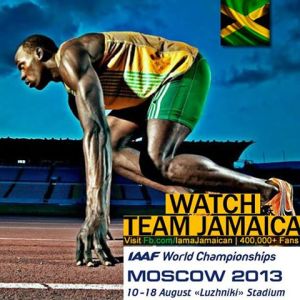 Jamaica started as a sprinter, then turned into a middle distance runner, and now, aged, it is trying its hand at the marathon. No matter what the event, to succeed in each takes a lot of hard work and dedication. Can Jamaica take on the Olympics motto of “faster, higher, stronger”? Or, has it adopted the Olympic creed, “The most important thing in the Olympic Games is not to win but to take part, just as the most important thing in life is not the triumph but the struggle. The essential thing is not to have conquered but to have fought well“?

My eyes will be glued to how Jamaica performs in the IMF version of athletics over the next few days.