By the time that I have finished writing this, my national pride may be overflowing, if Usain Bolt regains the title of World Champion in the 100 metres sprint; in Moscow it will be gushing if the other three Jamaicans who made it to the final take the other places 2nd to 4th. I would feel cock-a-hoop if the Jamaicans did the 1-4 places with anyone of the four winning. But, that prospect was not what inspired my title.

I was sitting in St. Andrew Parish Church this morning,

listening to the sermon–which was all about faith–and all I could think about was stew peas and rice. 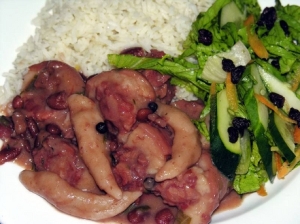 I felt a little ashamed, at first, then my mind figured out what was going on.

Yesterday, on our way down the Blue Mountains, we stopped at Cafe Blue to grab a spot of lunch. The food there is always very good. We met some other diners–Jamaicans, of whom two men who had left in 1974 for the USA, but were visiting again, as they said they do often. We exchanged a few pleasantries, and we let out that we had moved recently to Jamaica–in my case, moving back. They exclaimed and asked why, given that things in Jamaica are so bad. I bristled, and asked directly why they were trashing their country. I never really got an answer. I imagined that they did not like the tendency that Jamaica was taking under Michael Manley’s first stint as PM, and fled, as many others did. I didn’t press them much, but I was really upset. I was more taken aback because they were in Jamaica enjoying some of the simple pleasures that the country offers: its natural beauty, the genuine warmth of its people, and its simple rural life–often exemplified by a range of tasty and filling meals. It was some of those meals that they were enjoying–beef soup with cow skin, followed by curry goat and rice. They loved every mouthful. Whatever faith they had lost, at least some seemed to have been restored.

They left and headed further up the mountains, to spend their time with a lady friend who is building a house near Newcastle. As they were leaving, an American couple entered the cafe. They looked a little uncertain, but the waitress and the departing diners encouraged them to try anything on the menu: “It’s all good!” Did they say that? I asked myself. Of course, they had. They really loved that aspect of the country.

Later in the afternoon, I went to visit some cousins. We were just happy to see a new baby boy, who was glad to be able to have some new hands hold him. My older cousin rushed into the house with some shopping bags and I helped her with them, so that she could rush off again to pay some bills. Her daughter, the new mother, started to breast feed her baby. “Pass me one patty,” she begged me. My daughter, quickly becoming Jamaicanized, went to the brown paper bag and pulled out one hot beef patty and placed it on a plate in front of the feeding mother. “Put it in the bag, for me, sweetie,” she asked my daughter, who thought she’d done the right, lady-like, thing of putting it on a plate. She learned fast that patties taste better when eaten out of the bag–at least, that’s so for we Jamaicans. We all tucked into a patty, and the feeding mother and my daughter didn’t hesitate to tackle another.

When my older cousin came back home, we sat and talked for a while. Eventually, she got onto how she had struggled to manage food costs in her home. Now that she’s retired and does all the cooking herself, she realises that she needs to buy less food and cooks more sensibly, taking account of the fact that she has no small children and that she and her husband are often happy to have left overs or get food out, if they are on the road. She turned her attention to me. “I know you must be missing Jamaican food,” she asserted. She then went on to tell me what she was planning to cook and how she would put some up for me: plantain porridge, fried fish, stew peas and rice with pigtail. Oh, be still my beating heart! I couldn’t wait for her call. In fact, I was ready to move in right then, so that I did not have to wait to get some great things to eat.

This all tied together nicely for me, and that’s what my mind helped me to do in church. The men we’d met had lost faith in Jamaica. They left and having left, they could only see how bad things were. Yet, here they were, back in Jamaica, lapping up what it offered, free as birds, happy as larks, yet not prepared to utter a positive word about that same place. A contradiction? Very much so, to me.

I’d had a somewhat disappointing meal at Strawberry Hill the day before. I had been told I was getting peas soup. My mind went back to a huge bowl of that, which I had eaten with immense pleasure the week before in Mandeville. It had dumplings, yam, sweet potato, and chicken foot spilling out of the bowl. My Strawberry Hill version was very faux: it was peas skin and smooth and no food. My little daughter wrinkled her nose up at it, and in her newly found phrasing whispered to me “It nah no food in it!” It did not work. We did not want this compromise dish: we were proudly expecting the real deal. The food manager explained that the dish was really ‘cream of peas soup’. I had a little shiver, but understood. The hotel was trying to ‘soften’ the dish to make it more appealing to a different audience. But, the problem was that in this country, we like the country things, and the country-style means ‘food’ (starches a plenty and all parts of an animal to make it taste better). That’s how many of our dishes are made. That’s what makes them what they are. That’s what we should hoist above our heads and say “A so wi do it!”

So, there, I have the circle closed. My faith in things Jamaican is often challenged. But, I get brought back to holding it strongly when I think of ‘country’. Country means the whole land, but it also means the people who live off the land, and the food we eat that reflects that so strongly. Children are off enjoying time ‘in country’, swimming in rivers, going to the fields, sitting with grandparents, cooking outside on coal pots, getting manish water, eating roast yam.

The big race has not yet been run. Bolt made renta yam

famous after the 2008 Olympics when he credited eating it with giving him what he has to beat all comers in the sprints. That’s ‘country’ at its simplest. It makes you what you are.

What was so ironic about the meeting at the cafe was that the American visitors, both white, had just arrived from Miami. They were headed up the mountain to hike and find a place they had booked for bed and breakfast. The waitress told them how to find it: “Go up to Redlight and turn down the dirt road,” she’d said, checking both right and left hand to make sure she knew which way to turn. They were driving themselves. I told them that the road became narrower as they went higher. “Narrower?” asked the lady, “It’s already pretty narrow.” She looked concerned but I told her that it would be no real problem, but just to be aware. They both smiled. They had no qualms about the fact that they were going to have a wonderful time…in Jamaica, of all places. They had faith that they would get many wonderful experiences from this country which some of its native sons thought was ‘so bad’. Some contradictions, there? Not really.

My wife asked me yesterday if I would make a Jamaican breakfast this morning. I woke early, in part to watch live coverage of the World Championships. I did that and also prepared breakfast–saltfish and fried dumplings. We came back from church just in time to see the semis of the men’s 100 metres sprint. All went well. All four Jamaicans qualified for the final. All looked good for the country. We have put our faith in them and they have their faith, strong, and built on everything that this country has to offer. They did not flee, or leave to get better. They stayed in Jamaica and somehow became world beaters. Some contradictions, there? Not really.

Time to focus on “the greatest sprinter of all time”. What will be, will be. But, don’t lose faith in yourself or your country.